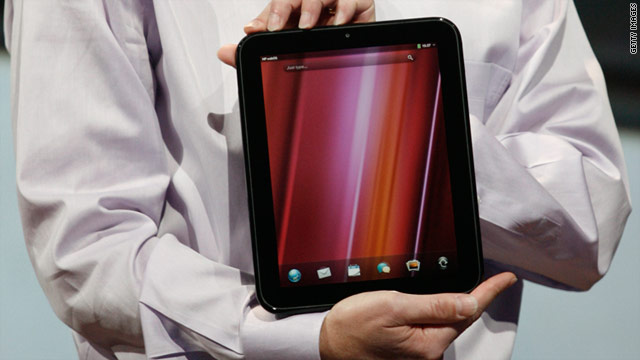 HP's ace in the hole isn't Flash, battery life or even Touch to Share. It's the operating system.
STORY HIGHLIGHTS
RELATED TOPICS

(WIRED) -- When the chips are down and the cards have been dealt, do you go big or go home?

With the debut of its TouchPad tablet, HP's answer is clear: "We're all in, baby."

As a hardware device, it's competitive and solid. The software is impressive -- it sports webOS, the company's proprietary mobile platform. But the real question is, when drawing down against other tablets, does HP have a winning hand?

Things like dual-core processors, front-facing cameras, and brilliant, hi-res touch displays aren't bragging points. At this point in the game, they're table stakes.

Thankfully, the TouchPad's hardware doesn't stray far from the pack. It sports a 1.2-GHz Qualcomm Snapdragon chip backed by a gig of RAM, more than enough to let me zip through menu screens and open applications with relative ease. With Bluetooth compatibility, a 9.7-inch display and a slick-yet-durable plastic exterior shell, the TouchPad's specs stand up to competitors.

It isn't exactly easy on the arms. Similar to Motorola's Xoom at 1.6 pounds and a little over half an inch thick, the TouchPad is the antithesis of skinny, airy tablets like the iPad 2 or the Galaxy Tab 10.1.

This isn't as much of a problem while I'm on the couch with an arm rest. But if you're casually browsing or reading during, say, a 30-minute commute on the subway, you'll start to feel that extra heft.

The TouchPad plays well with other HP mobile hardware, too. If you're a Palm/HP loyalist with one of the new Veer smartphones, or the forthcoming Pre 3, you'll soon have the option of pairing the phone to the tablet via Bluetooth -- after an OTA update, that is. When paired, any calls or texts received will show up on the TouchPad, which you can then use to respond.

There's also "Touch to Share," a new feature that lets your TouchPad send an open web page to your HP smartphone.

Wave the phone in front of the tablet, and the same browser window pops up on your phone. Ideally, it's for when you want to leave the tablet at home while taking your web content with you to read later.

The system isn't fully baked. I tested Touch to Share with a preproduction Pre 3 phone, and it took multiple waves and awkward angling for the TouchPad to send a page to the phone. Also, you're supposed to be able to send an open page on your phone back to the tablet with another wave of the phone, but I wasn't able to do this.

One more problem: you'll need a new phone to do any of this. Older Palm devices like the Pre and the Pixie aren't capable of Touch to Share -- only the Veer (after an unspecified future software update), the Pre 3 and whatever phones HP releases in the future.

For media consumption, it's about average. The sound on the external speakers is fine enough, but quality isn't the problem -- it's the placement.

The stereo speakers are along the bottom and behind the screen, which means all sound is pushed out away from your face. It's a problem that plagues audio on tablets as a whole. Aside from the BlackBerry PlayBook, which has fantastic audio because of front-facing speakers, listening to most anything on a tablet without headphones isn't very enjoyable.

Boasting a "full web" experience, the TouchPad is capable of playing Adobe Flash content on the 10.3 beta version of Flash Player. And just like our past experiences with Flash on tablets, it's nowhere near perfection.

It took me forever to load content on PopCapGames.com, a popular Flash gaming web site. When I finally did get a game up and running, performance was choppy at best, a gaming experience punctuated with pauses and stuttering. YouTube videos ran somewhat better, but it wasn't exactly what I'd call reliable.

Battery life is on par with most other Android tablets currently available. Under heavy use -- including continuous browsing and lots of Flash movie viewing -- I wore the battery down close to zero in about 7.5 to 8 hours. If you use it casually and intermittently, add another hour or two to that lifespan.

HP's ace in the hole isn't Flash, battery life or even Touch to Share. It's the operating system.

First introduced in 2009, webOS was the "secret sauce" to Palm's then-new Pre, Pre Plus and Pixie smartphones. (HP acquired Palm in 2010, scooping up webOS with it.)

With multitasking, open applications are sorted on the desktop as "cards," all of which are able to run simultaneously in the background. A simple swipe of your finger from the bottom of the screen brings up the open applications in your hand, as it were. Shuffling between your open apps is as easy as swiping from side to side.

I've loved multitasking since the Palm Pre first appeared, and the increased screen real estate of the TouchPad does the interface justice. Switching between cards is effortless.

Synergy is nifty, too. It does away with the idea of updating and syncing personal data through a central PC hub. Instead, updates across your disparate accounts come wirelessly, whether you're making the change to your data on your TouchPad or your desktop.

Example: After entering my Facebook and Gmail account info into the TouchPad, my Facebook events and Google Calendar appointments automatically showed up in HP's calendar app (color-coded, even).

And if you're paired to an HP Veer or Pre 3 smartphone via Bluetooth, SMS text conversations with a friend will show up in the messaging application in one long thread, alongside of any Google Talk chatting you've done.

There's just one big problem with the webOS platform: Nobody freaking uses it.

As of May 2011, Android is on 36 percent of all U.S. smartphones, while iOS runs on 26 percent, according to Nielsen research data. WebOS is at 2 percent.

This is a huge issue. As a rule, the fewer devices there are running an operating system, the less developers will want to create apps for it.

Consider the app ecosystems of the two market giants: Android currently hosts over 200,000 apps in its Market, and as of late May, Apple boasts half a million. When the TouchPad hits shelves on July 1, HP says there will be about 6,200 apps available for webOS phones, which the tablet can run, and another 300 apps optimized specifically for the TouchPad. How can HP ever hope to catch up to those numbers?

Essentially, they're not even going to try (at least, not immediately). Instead, HP is taking a curated approach with "Pivot," a monthly e-publication that features articles on select webOS applications and the developers behind them.

It's an effort to lure in developers with the promise of exposure, more than an app would get after being buried in the sprawling Android or Apple markets. That means more apps for the webOS platform, and more sales for the small-time developer. In theory, at least.

To be fair, the TouchPad launches with more tablet-specific apps than both the Apple and Android tablet launches combined. And fast-paced growth is certainly possible: It took Android around four months to break the 200 tablet apps mark, and a little over a year for Apple to host tens of thousands. With the right support, the app ecosystem on webOS can grow.

There is, of course, the problem of the mobile music service. In and of itself, the TouchPad's music app is fine. It functions well, and the user interface is unobtrusive. (Read: not fugly.)

But consider what the others are offering: Google's Music Beta allows wireless streaming to any device running Android version 2.2 and above, free of local storage. Apple's upcoming iCloud requires that you store your files locally, but you can wirelessly sync any iTunes data you already own to your iOS devices from its cloud servers, though it doesn't do this automatically.

Getting music onto your TouchPad is USB-only, and an HP-backed cloud service isn't exactly in the cards for the near future.

To be fair, if you've got a Google Music invite, you can access it through a browser window on the TouchPad. And perhaps HP will coax Amazon into bundling its Cloud Player music app with the TouchPad at some point.

But it speaks to a larger question that HP still hasn't answered: What's the major draw HP offers that I can't get in Android or iOS -- two established competitors with more customers, more apps and more time in the market?

I'm not saying HP is betting on a weak hand with the TouchPad itself. It's well-built, easy on the eyes and I dig the card-based OS running on a tablet even more than I had anticipated.

The problem is, it's squaring off against some expert gamblers.

WIRED One of the first platforms to have a tablet-optimized Facebook app -- take that, Apple. Pair with a Pre 3 or Veer smartphone to receive texts or calls on the tablet itself. JustType navigation bar allows for quick device search from the home screen.

TIRED No back-facing camera means no awkward tablet picture-taking, for better or for worse. Beta version of Flash runs like an alpha version of Flash. No SD card slot means no room for easy expansion. Bundled QuickOffice app has difficulty displaying Google Docs. No tabbed browsing? For shame.