Video games and kids: How young is too young? 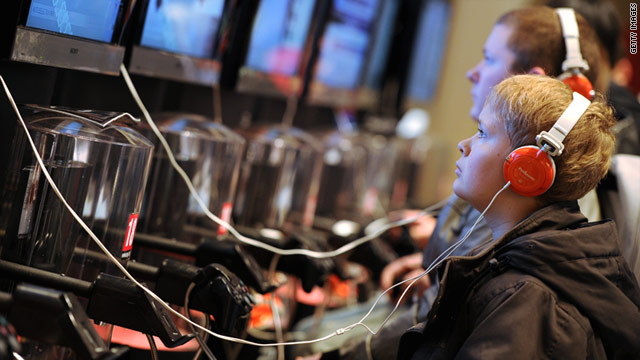 Are videogames OK for 8-year-olds? Seven-year-olds? Six? How young is too young?
STORY HIGHLIGHTS
RELATED TOPICS

(WIRED) -- I was visiting my nephews, again. Within seconds of seeing me fiddle with my iPhone, my older nephew, Jack, who is 8, asked me, again, if my iPhone had any videogames on it.

"Uh, no, sorry Jack," was my reply, letting a white lie skip through my teeth. I knew his mother and father might be none too pleased to see the two of us hunched over the tiny screen playing "Star Wars Arcade: Falcon Gunner" or "Lego Indiana Jones 2."

What his parents are doing is difficult. They've chosen to keep Jack videogame-free for as long as possible.

Of course, Jack has gotten a taste of videogames. He gets to play on special occasions, and will probably play at friends' houses where the rules are different.

I suspect his parents will persist until they can't hold out any longer, until peer pressure from schoolmates, combined with the reality that kids of Jack's generation will be inexorably bound to video technology like none before them, forces them to relent.

Perhaps it's a lost cause. Still, key questions can be raised here, and they are good ones to consider.

What is the appropriate age to let kids loose in the digital playscape? Are videogames OK for 8-year-olds? Seven-year-olds? Six? How young is too young?

Some games are appropriate for certain age groups and some games aren't; obviously, no one is allowing their 5-year-old to play "Grand Theft Auto." (Jeezum, let's hope.)

I'm no expert, but I've been reading up on some of the research. For one, the trend is that each year, younger and younger kids are experiencing screen time.

This article references a study saying that since 2005, "the average age that U.S. youngsters started to use electronic gadgets had fallen from just over 8 to just over 6 1/2."

Educational psychologist and author Jane Healy recently wrote: "My position is that children are better off without computers before the age of 7. By age 7, their brains have undergone a great deal of maturation and the basics should be in there. They can start to expand the type of thinking they can do so they can actually start to get something worthwhile using good software, for example, good simulation programs."

To me, the issue isn't about fears that games instill violent behavior, but rather that videogames are usurping the power of more conventional toys. There may be merits to shielding boys and girls like Jack from their digital futures, at least temporarily, if kids can first learn to amuse themselves without automatically reaching for a game controller.

The truck, the toy sword, the soccer ball, the sandbox, the board game, the pad of paper, the book: All can be as magical and entrancing as anything a game studio can cook up. Perhaps this is the rule of thumb: Once a love of non-digital play is instilled in young minds and habits, then let kids run free through the wild world of pixels.

Obviously there are no definitive answers. These are questions that have been discussed on Wired.com before. But I hope this space can continue to provide an excellent forum to discuss the issues. I'm curious to hear your viewpoints. Please comment below.

And, next time I see my nephew Jack, I'll have a better idea of how to counter his whining -- sweet whining, but whining nonetheless.