Today's video gamer? It might not be who you think 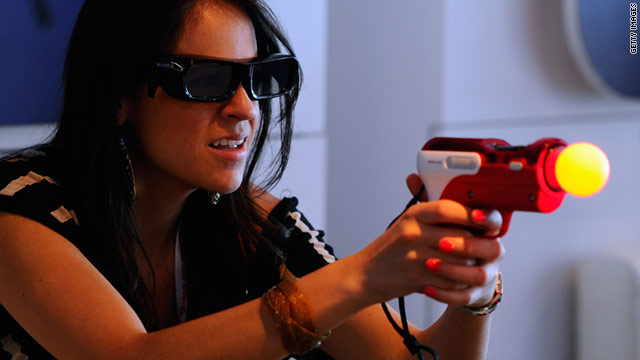 (CNN) -- At 37, Lisa Sharp is comfortable calling herself a video-game junkie. But that wasn't always the case.

"I was the typical high-school girl who always watched the guys play and never picked up a console until well after college," she said.

Then, one day, the cable was out, so she grabbed a controller for her roommate's Nintendo 64. The rest is pixelated history.

Now, she and her husband have an old Nintendo 64 of their own. And a GameCube. And a PlayStation 2. And a Wii. And, as of last Christmas, a PlayStation 3.

"It relaxes me," said the Atlanta resident, whose favorites include the "Legend of Zelda" and "Final Fantasy" series. "My job gets a little bit crazy at times, so it's nice to go slash and bang stuff around."

As a mom who works in the finance department at Georgia Tech, Sharp hardly fits the stereotype of the avid video gamer -- that teenage or 20-something guy in the basement grinding out hours on his console or PC.

And that's part of a story that those in the video-gaming world already know: thanks partly to games on new platforms such as Facebook, smartphones and tablets, gaming is more popular than ever. Some observers even see parallels to the early-'80s arcade heyday, when games such as "Pac-Man" became mainstream phenomenons.

Last year, video-game software and hardware raked in more than $25 billion, according to the Entertainment Software Association, a gaming industry trade group. Compare that with the $7.3 billion the association reported in 2004, and it's not hard to see what's happening.

"I still think we have a lot of growth to go, even though we're at the highest point ever of people playing video games," said Tal Blevins, vice president of games content at IGN Entertainment. "As we have grown up with video games, it's just become a normal part of society.

"Video games did seem weird to our parents when we were young. But now, we're the old fogies, and it doesn't even phase us."

The massive growth of the past few years, evidenced at last week's Electronic Entertainment Expo in Los Angeles, has moved on two tracks.

The first is the swelling mainstream popularity of so-called "hardcore" gaming titles, the detailed, immersive and artfully rendered games that take even the most devout players hundreds of hours to complete (longer, if they opt for multiplayer challenges that can last forever).

Last year's "Call of Duty: Black Ops" didn't just break video-game records. Selling 5.6 million copies in 24 hours and grossing $650 million in its first five days, it was the biggest entertainment opening of all time -- bigger than "Titanic," "Avatar" and every other Hollywood blockbuster.

The previous record holder? "Call of Duty: Modern Warfare 2," which grossed $550 million in the same five-day span. By comparison, "Avatar" grossed $77 million in its opening weekend.

"They've become blockbusters in the way we traditionally talk about something at the cinema," said Rich Taylor, a senior vice president with the Entertainment Software Association. "If you look at the dollars and cents compared to the blockbusters coming out of Hollywood and the publishing world ... (video games) are the ones that are knocking it out of the park."

The rise of the social game

But the industry has also made massive strides on a second front. The recent explosion of so-called casual gaming has brought new populations into the fold and threatens to forever blur the distinction between "gamer" and "non-gamer."

Nintendo's Wii, with its motion-based controllers, unleashed a flood of family-friendly party games when it was released in 2006. It quickly became the most popular gaming console in the world and was followed last year by Microsoft's Kinect and Sony's Move motion systems.

Zynga, the makers of the alternately addictive or infuriating FarmVille, is worth an estimated $14.5 billion and expected to make its initial stock offering in the near future.

And versions of "Angry Birds," the addictive mobile game by Rovio, recently reached a staggering 250 million downloads on multiple platforms, from the iPhone and iPad to Google's Chrome browser.

"Mobile, and the iPhone in particular, is creating a so-much more casual and mainstream audience," said Dave Castelnuevo, co-creator of "Pocket God," a perennial app-store favorite that has been downloaded more than 4.5 million times since debuting in 2009. "They're not your hardcore gamers. My wife can't quit 'Angry Birds,' and she's never picked up an Xbox joystick."

The numbers definitely show a growing gamer base.

According to ESA's statistics, the average video-game player last year was 37 years old (like Sharp). That's up from 30 in 2004.

Forty-two percent of players were women. And nearly half (47%) of the online games people reported playing could be categorized as "casual" -- puzzles, trivia, board games, card games and the like.

More "hardcore" titles will always be in demand and "the industry has answered that bell time and time again," Taylor said. "But it's an industry that has expectations beyond just that audience. Any more, if it has a screen, it's going to have games."

Among diehard video-game enthusiasts, the rise of casual games has caused resentment in some quarters. On CNN Tech, any passing mention of FarmVille brings waves of fury in the comments section.

A story from E3 on mobile favorite "Fruit Ninja" coming to Microsoft's Xbox Kinect system prompted angry responses. Among them: "E3 is currently going on and THIS is the crap that mainstream media decides to write to the public about? How about talking about real games rather than app crap."

"I think sometimes, a lot of the people who are in the old-school mentality of hardcore gaming feel a little threatened with what's been happening over the past two or three years because it was, to them, almost this secret world," IGN's Blevins said. "It's like a 'We don't want you in our clubhouse' mentality."

At E3, Nintendo's world president Satoru Iwata talked with CNN about the rift as he promoted the upcoming Wii U, which Nintendo hopes will appeal to avid and casual gamers. He said that if tension between the two groups continues, it could be dangerous for the industry.

"Many people in this industry tend to categorize our customers into two groups -- one is the core gamer and the other is casual gamers. They somehow say that these two groups will never mix or overlap ... " Iwata said through a translator. "If we maintain that kind of wall or psychological barrier separating the two groups, someday I'm afraid that the culture of video games will be diminished."

Many observers say that, as gaming's growth continues, it's just a matter of time before those barriers fall.

"I consider myself a 'good game' gamer," said Taylor. "I play the games that are high quality, that entertain me. I play first-person shooters. I play sports games. I play 'Little Big Planet.' I play 'Angry Birds.' I play a lot of 'Scrabble.' I don't sit there and say 'I'm a hardcore gamer so I only play these titles.' I don't go to the store and see the hardcore-gaming section."

Castelnuevo, whose "Pocket God" franchise has branched out into toys, comics and cartoons, agrees.

"I think it's all growing," he said. "The 13-year-old males (who play "Pocket God") also play Xbox. They also play Nintendo DS. They love Mario and Batman and 'Bioshock.' "

Blevins also sees the divide getting thinner and says that, one day, even the term "gamer" may be outdated.

"You don't say 'I'm a movie-er' or 'I'm a book-er,' " he said. "Video games are now just another form of entertainment. There was once a little bit of that stigma -- the lonely kid in the basement. It's very different these days."