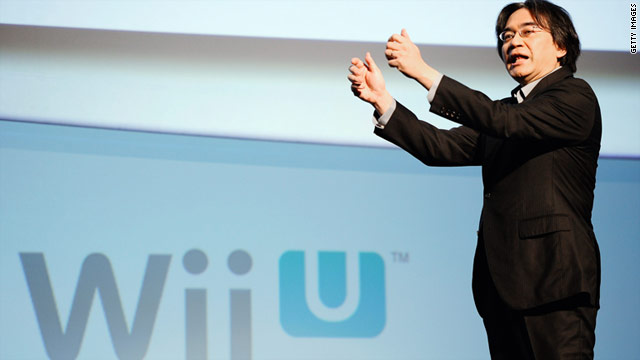 Los Angeles (CNN) -- At the world's biggest showcase for video games, Nintendo made the biggest splash this week with the unveiling of Wii U -- the next generation of its popular, motion-controlled gaming system.

The system's major advance, displayed for the first time this week at the Electronic Entertainment Expo (E3), is a handheld controller with its own 6.2-inch touchscreen. That remote lets you play games on the controller and on the television at the same time, allowing for new gaming possibilities.

Many gaming writers who got their hands on the system -- which is in its early stages and is expected to be released in 2012 -- were impressed with its potential. Others were, at best, confused or unimpressed.

That response reminded Satoru Iwata, Nintendo's global president, of the debut of another product -- the original Wii, which would go on to become the top-selling game console in the world.

Iwata sat down with CNN on Wednesday to discuss, through an interpreter, gamer reactions to Wii U, its potential as a game changer for both casual and hardcore gamers, and what that weird name is all about.

CNN: How do you feel the reactions have been to the Wii U?

It reminds me of how we presented Wii for the first time at E3 in 2006. I think this is one of the evidences to say that the Wii U is actually trying to present something unprecedented -- something very unique.

In other words, whenever anything new, anything unprecedented, is introduced to the market, the reaction is almost always mixed.

CNN: There was even some confusion over whether Wii U is actually a new console or just a controller. What can you share about the console itself?

Iwata: In an opportunity such as an E3 presentation, what we could show is a simple box. People might get the idea that this is a little bit bigger size of the existing Wii, nothing else. We focused on demonstrating something really unique, which was this new controller.

But some people had some misunderstanding -- that this (controller) alone might let you play games or that this might be a peripheral for the existing Wii game.

Yes, you definitely need that console beneath or near the TV at your home. It is going to read highly advanced optical discs -- not exactly the same as a DVD but similar to the style of a DVD -- but it has much more memory capacity than a DVD. Of course, Wii U is not just a beefed up version of the Wii

CNN: I think some people saw the system as an either/or -- either I'm playing on the TV screen or I'm playing here (on the controller). The integration of the two, using them together, I think, is an aspect that maybe everyone hasn't seen yet.

Iwata: The ability for you to be able to see pictures on TV and pictures in your hand is a very unique characteristic of Wii U. But the real potential actually can only be realized when these two are connected with each other. How we are going to make use of the two screens is going to be a real game changer.

Even though those two got the loudest ovation from the audience, they are only a glimpse of what developers are trying to do. Eventually, there will be endless potential to what these two screens will be able to create.

CNN: I want to ask you more about the name. Why Wii U? What would you like people to understand from that name?

And of course, it's "U" as in "unique." We always try to be a unique company. Another thing is "U" as in "ultimate." We really wanted to make a great advancement, to reach out to that ultimate goal.

Another meaning is "U" as in "unifying." Many people in this industry tend to categorize our customers into two groups -- one is the core gamer and the other is casual gamers.

The heart of the matter is that everybody starts video games as a beginner. Then, after going through a lot of experiences and becoming more and more fond of video games, they become the experts.

If we maintain that kind of wall or psychological barrier separating the two groups, someday I'm afraid that the culture of video games will be diminished.

We want to create a kind of cycle where casual gamers are gradually growing up to become passionate players. In order to maintain that kind of cycle, we needed to break down the wall.

Iwata: We have contacted several of the top-notch developers (from) the influential publishers -- those who are already making video games for Xbox 360 and PlayStation 3.

They've been making video games for many years for these machines, and the fact of the matter is that they really want to do more, but there are some limitations in terms of what kind of barriers are there.

Because they have already tried to explore as much as possible with the existing controller, they are feeling as if they've done everything they could and there's nothing left. When we introduced them to this new opportunity, they immediately made some proposals.

Not counter-proposals, because we hadn't even made our own proposals yet (laughs). They volunteered their own ideas: "We can do this; we can do that."

For example, in some of the shooter games, it's usual that you are supposed to change between different weapons, different defense systems, based on the situation you're in. You are supposed to switch between screens in the current system. You don't really have to do so any more with this.

All you have to do is simply see your screen in your hand and just touch it in order to change the weapon, for example, see different maps or instruct others to move this way and move that way. I'm not telling you ... these developers are telling me with lots of enthusiasm.

CNN: How much will Wii U cost?

Iwata: Unfortunately, I just cannot comment about even a price range. However, now that we have made the announcement, that does mean that we think whoever buys what we are going to offer is going to find it very balanced in terms of the value we'll be able to provide the customer with Wii U.

CNN: I have to ask you about a challenge for your industry -- online security. Obviously, your competitor Sony had a very bad problem recently. You had a similar but smaller problem. What would you tell customers who use your online product about security going forward?

Iwata: Of course, security and online security is our utmost concern. We are, of course, taking great care to maintain as much security, as strong of security, as possible all the time. Fortunately, this time, there was no leakage of personal data, individual information, at all.

CNN: Did anything change after the breach?

Iwata: We have once again checked all the possibilities. We are reminding ourselves of the necessity to always keep our guards up so this kind of problem won't happen again.