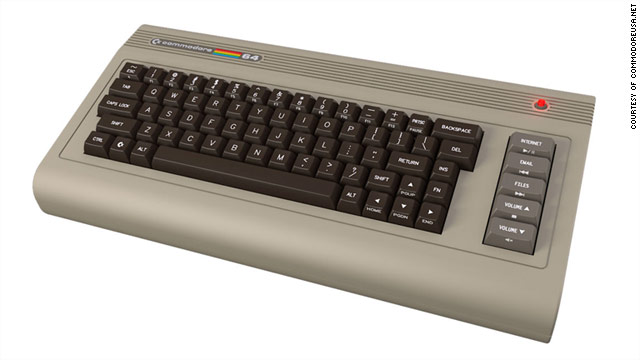 This classic early-model computer, the Commodore 64, will be back in action soon with a nostalgic look but modern components.
STORY HIGHLIGHTS
RELATED TOPICS

(CNN) -- It was chunky, a hideous tan color, and, by today's standards, ridiculously feeble.

It was limited to 64 kilobytes of memory -- about the equivalent of one long e-mail.

And yet 25 years ago, almost everyone seemed to have one.

It was the Commodore 64, an 8-bit, mass-produced machine that brought personal computing into the home for millions of users in the early- and mid-1980s. People used their C64s, as they were known, for everything from basic office functions to primitive games like "Impossible Mission."

Commodore sold more than 17 million of its C64 systems, according to the company. The Guinness Book of World Records lists the Commodore 64 as the best-selling single computer model of all time.

"Spent hours and hours writing little programs for my then very young kids .... happy days," wrote Ian Mumby last month on a Commodore 64 Facebook page. "Still have the c64 in the loft, may have to go dig it out and play."

Now, nearly three decades after it debuted in 1982, the Commodore 64 is making a comeback. The company that built it, Commodore International, went bankrupt in 1994. But a revived outfit, Commodore USA, plans to release a line of retro-looking Commodore computers this month that have modern components inside.

On the outside, these self-contained "keyboard computers" will look as they did back when Ronald Reagan was in the White House and "Miami Vice" was bringing moody pastel hues to TV. Under the hood, however, they will be very up-to-date.

Prices start at $595 -- the same as the original machine. A monitor and mouse are sold separately. Pre-sales are under way, and Commodore is promising delivery by early June.

Commodore USA President and CEO Barry Altman said he sought out the owners of the defunct Commodore brand and acquired the licenses to the name. He wasn't planning to reproduce a Commodore 64 model at first, but changed his mind after being flooded with requests on his website.

Altman, whose reborn Commodore company is based in Fort Lauderdale, Florida, began taking pre-orders on the site April 5 and was stunned by the response.

"The demand for this unit is worldwide. It's far, far exceeding our wildest expectations," Altman told CNN. He said about 20,000 models were ordered in each of the first few days they went on sale in early April.

"Because it's so retro, it's even been popular among kids who weren't even alive when the (original) 64 was around," he said.

Altman became sold on Commodores when he ran his satellite communications company on almost 200 Commodore 64s in the 1980s.

"It was a great product, with a great form factor," he said. "It contains the entire computer inside the keyboard. It takes up no extra room."

The C64 became hugely popular because it had more memory and was much cheaper than comparable models from IBM and Apple. It could also be hooked up to almost any ordinary television, which served as a monitor.

Altman said his research showed brand recognition of 87% for the Commodore 64, a remarkable score for a model that's been off the market for 17 years.

Options range from a classically styled $250 plastic shell for DIYers who want to insert their own motherboard and hard drive, to a fully loaded $895 "Ultimate" system with 1 TB of storage space and a Blu-ray drive.

Commodore's historical VIC line of 8-bit personal computers is also getting an overhaul. And Altman promises a new line of computers based on the popular Commodore Amiga brand will also arrive soon.

Replicating the look and feel of the original Commodore 64 machines was a "monumental undertaking," he said. To get the distinctive tan color just right, Altman had to send samples to a lab to be analyzed and reproduced.

"That original color -- brown, tan, beige, whatever you want to call it -- must have been designed by an alien," he said.

The original Commodore 64s may conjure up fond memories in millions of former arcade-loving adolescents. But will the system's storied past and chunky beige aesthetic be enough to attract today's computer users, who have been weaned on the sleek stylings and slick interfaces of Apple devices?

If Altman is worried about that, he's not saying.

"I was taken by surprise by the scope of (the interest)," he told CNN. "Nostalgia is a big thing. There are a tremendous amount of people who have been brought up on the Commodore 64."