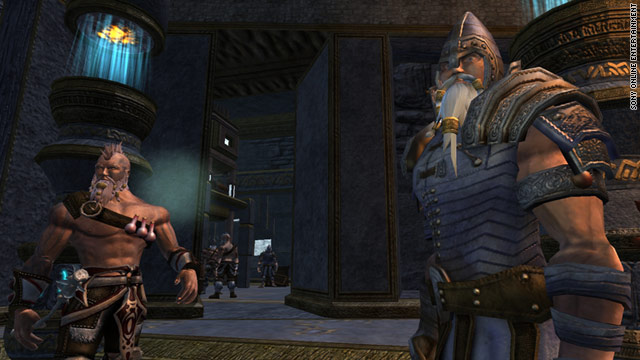 Sony Online Entertainment, which manages the "EverQuest" series, shut down its online services due to a far-reaching hack.
STORY HIGHLIGHTS
RELATED TOPICS

Sony disclosed the first breach on April 22, and then on April 27, the company announced that personal info and perhaps credit card numbers had been stolen for as many as 77 million accounts.

This additional network was targeted on April 16 and April 17, the same days the other networks were hacked. While the infrastructures are separate, "There's a degree of architecture that overlaps" among Sony's many networks, said Michele Sturdivant, a spokeswoman for Sony Online Entertainment.

However, information from an additional 12,700 users stored on a database that was retired in 2007 was also compromised, Sony said. The data there included credit and debit-card numbers and expiration dates, but not security codes, for non-United States residents, as well as direct-debit banking records for some customers in Austria, Germany, the Netherlands and Spain.

Sony apologized for the security lapse and outages on Sunday. The company plans to offer PlayStation account holders a 30-day voucher for the PlayStation Plus service, which lets gamers download free and exclusive games. Current Plus subscribers will get an extra 30 days added to their accounts.

Similarly, Sony Online Entertainment will add 30 days to customers' accounts, along with additional play time for each day the service is down. The company also says it is in the process of outlining how it will recompense gamers who own its PlayStation 3 games. Additionally, Sony will offer complimentary assistance for customers who want to enroll in identity theft protection programs.

Sony says it's working with the Federal Bureau of Investigation to make sense of the security breach. On Monday, PlayStation spokesman Patrick Seybold denied a report that said the hacker group offered to sell Sony a list of credit card numbers stolen from its systems.