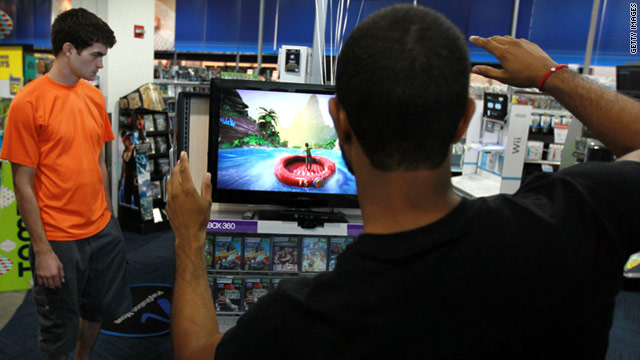 Xbox's Kinect system lets gamers operate their TVs by moving their bodies but may never catch on with mainstream audiences.
STORY HIGHLIGHTS

(CNN) -- While the picture quality on your TV has evolved over the years, the way you interact with your TV is still stuck in the Stone Age. That is, the remote control and channel guide still need some serious innovation.

That's why we're so impressed with the growing selection of online video that's available on Microsoft's Xbox 360 and its motion-sensing Kinect interface.

Kinect could very well represent the future of how people watch TV: Zipping from channel to channel (or from app to app) without a remote control, using their hands and voice to control the experience.

But given Microsoft's history of failures in the television industry -- and the overall slowness, messiness and complexity of the TV business -- the odds of Microsoft's system being widely adopted are not great.

First, let's focus on why this is cool.

The idea of being able to ditch your table full of remote controls and just use your hands and voice to interact with the TV is compelling. It's much nicer than QWERTY keyboards, which are a terrible idea in the living room. It's also better than Wii-like remote controls, or even using an iPad or smartphone as your TV remote, a feature that cable companies are increasingly rolling out.

Microsoft seems way ahead with the Kinect, and we're actually surprised that Apple -- which has been sticking a camera in all of its computers for a while now -- isn't the one who has led the way here. The Apple TV gadget should be powered by hand gestures and voice controls, not a silly little remote control.

Perhaps they're saving this for their often-rumored TV sets? And where's FaceTime for the TV? And all these other Apple TV apps we want to use?

So it's good news for Microsoft that Kinect, and all the high-quality entertainment apps on the Xbox 360, are looking more and more like the future of the living room. Already, some 40% of time spent on the Xbox 360 is spent on non-gaming experiences, including ESPN, Netflix, Facebook, etc.

And it's nice that Microsoft owns the intellectual property, especially through its acquisition of Canesta, which has filed for more than 50 patents.

But it's hard to imagine how Microsoft could come to dominate the TV business. For Xbox video and Kinect to really make a huge mark, they're going to have to be everywhere, the way Windows is for the PC industry.

So, what are Microsoft's options?

One idea: It could slap together an "Xbox TV" gadget to rival the Apple TV, which just includes the Xbox's entertainment apps and the Kinect interface, and no DVD drive. But it's hard to convince people they need something like this, and there are only so many inputs on a TV. This isn't working out magically for Apple, and probably wouldn't for Microsoft, either.

Microsoft could try making actual Xbox hi-def television sets and hope to disrupt the TV industry incumbents, which is what we eventually expect Apple to do. This may be the best chance for Microsoft to make a really high-quality, truly integrated system.

But people don't buy TVs very often, and it would be a slow way for Microsoft to gobble up market share. Plus, it would be a logistical nightmare.

As an alternative, it could license the Xbox TV and Kinect software to TV, Blu-ray and cable set-top box makers, and go for the "Windows" model, competing with Google TV. Maybe it could team up with Facebook for this one and make something social and awesome. Or partner with a cable TV company such as Comcast or AT&T. But this would entail giving up control and could go very slowly.

So while each of these is somewhat possible, we don't see Microsoft rushing to do any of them.

It seems like the company is tied too much to the Xbox's substantial gaming revenue to split the Xbox TV stuff off as a separate product -- even though there's a huge population of non-gamers who probably have no interest in buying an Xbox. And it seems Microsoft won't compete with Windows, even in the living room.

Instead, we see Microsoft more or less leaving the Xbox 360 intact, and trying to address the living room (again) with some kind of embedded Windows -- which might not necessarily have the Xbox's cool entertainment apps or the Kinect controller. And that, like Microsoft's other TV projects to date, will probably have a slow time catching on.

So while the Xbox and Kinect are really cool, and could actually be compelling TV experiences, we're still skeptical that Microsoft will be able to truly capitalize on them.

The good news for Xbox is that it doesn't look like any other companies are close with competing products -- Nintendo's followup to the Wii is not expected to hit stores until at least 2012 -- so it should have time to figure out a plan.