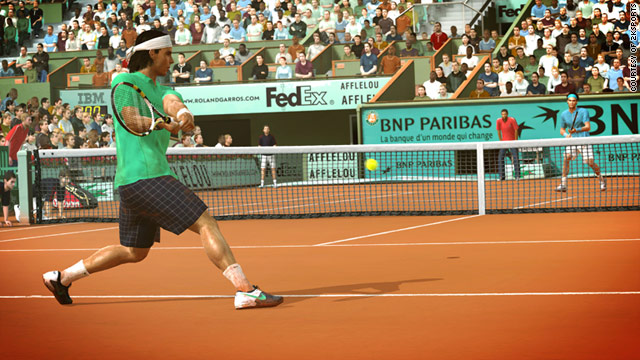 (CNN) -- "Top Spin 4" makes full use of lifelike animations, combined with innovative controls, to provide the most realistic tennis simulation game yet.

It has been three years since 2KSports put out a tennis game in this series, and the company decided to go back to the drawing board for the latest. The developers clearly wanted to keep the elements that made the "Top Spin" franchise great, while still tweaking some things to make it easier for new players to join the fun.

Shot selection is done using a press-and-hold system. Each button on the controller corresponds to a particular type of shot -- slice, normal, top-spin, lob.

There are refinements that can be added to each shot, like making it an inside-out shot or utilizing a drop shot when you want to draw in your opponent. But even if you never use these, you can still play a solid match.

Opponents include 25 professional and legendary tennis players. Roger Federer, Rafael Nadal and the Williams sisters are included as well as Pete Sampras and Andre Agassi (the bald version). Sadly, John McEnroe and his world-famous outbursts were not included.

Each tennis player is true to his or her real-world style of play; their movements and facial expressions are really lifelike. Expect Novak Djokovic to be super-aggressive and Michael Chang to run all over the court.

Game developers doubled the number of animations from their previous titles to over 4,000, to provide as much realism as possible. Even the background noise you hear during the virtual matches was recorded from real matches, including specific cheers for specific players.

The real fun is making your own player and seeing how well you can do. Gamers start off by designing their player's look, and then refine their beginning skills in several different categories.

Think of it as a tennis role-playing game, with powers unlocked as levels increase.

Decisions on how to play, which coach to use, and what skills to buff let players create a wide variety of tennis aces to take on the pros.

And it doesn't matter which game mode you use. Skills can be built up no matter whether you are playing against the computer or competing online against a human opponent.

Online, the Top Spin World Tour allows you to really see how well you can do against players from around the world. There are also weekly seasons to challenge your skills over a shorter period of time.

The men's and women's tournaments are separated, so don't think you can garner some easy experience points by picking on the weaker sex (you can make your own decision on which one that is).

There is also the 2KOpen, which features matches against star players, quicker matches and random venues. Experience gained here also contributes to the overall growth of your player.

The entire game was designed to be immersive, realistic and authentic. "Top Spin 4" hits all three of those points with a powerful overhand smash.

The play is addictive, and earning experience points makes me feel that my player is truly growing toward becoming a star. My only gripe is the artificial intelligence curve -- as I won 44 matches and 9 tournaments in a row before falling to my first defeat.

While I like winning as much as the next guy, even opponents like Federer and Andy Murray fell easily to me as I was building up my player. However, once I got to level 18 (there is a level cap at 20), Nadal crushed me in straight sets at the French Open semifinals and played the way he hadn't in previous games.

That lack of consistency was a little frustrating but is easily overlooked. It forced me to work harder on perfecting my shots and timing.

The game is deep and fulfilling for tennis fans while still remaining fun for an afternoon for beginning players. And the signature shots -- like between-the-legs while running away from the net -- are still as awe-inspiring as they are in real life.