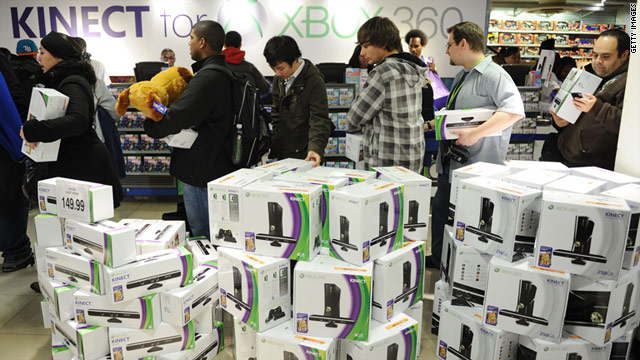 (Mashable) -- Microsoft has sold more than 10 million Kinect systems for the Xbox 360 to retailers, the company announced Wednesday.

Kinect, a controller-free gaming system that competes with the Nintendo Wii and Playstation 3 Move, has been selling at an impressive rate since it launched in November.

During the first three months after its launch, this rate was fast enough to earn Kinect the title of "fastest-selling consumer device." According to Guinness World Records, which officially confirmed the record today, Microsoft sold an average of 133,333 units per day between November 4 and January 3.

"The sales figures here speak for themselves," said Gaz Deaves, gaming editor for Guinness World Records in a statement from Microsoft. "According to independent research, no other consumer electronics device sold faster within a 60-day time span, which is an incredible achievement considering the strength of the sector."

In comparison, it took the Nintendo Wii about two years to pass the 10 million sales mark (although to be fair, Nintendo's system was about $100 more expensive at launch than Microsoft's sensor).

Kinect sales have unsurprisingly slowed since the holiday season and the initial launch. If sales had continued at the newly announced record rate, Microsoft would be announcing it had sold more than 18 million units instead of 10 million.

Even so, at this point it looks safe to call the device a smash hit.