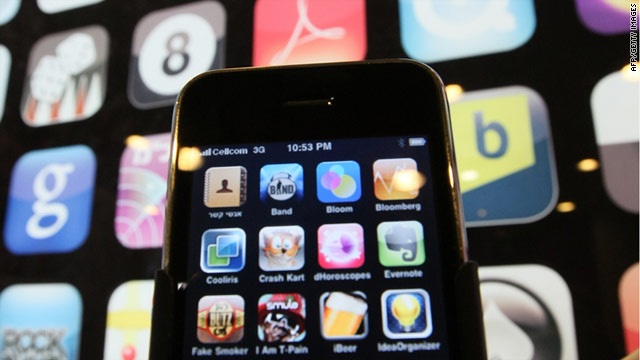 San Francisco (CNN) -- Some of the video game industry's most visible veterans took to their pulpits this week at the Game Developers Conference to denounce practices by Apple or Nintendo.

Trip Hawkins took shots at both.

Speaking to a roomful of game developers here Thursday, Hawkins said Apple and followers of its mobile-platform mantra are only creating the illusion of a viable business model for third-party developers.

With more than 350,000 apps available on Apple's digital store, game creators are finding it tough to attract attention despite tens of millions of potential customers who own Apple gadgets, he said.

"They have over-encouraged supply," Hawkins said on a panel at the conference. Using statistics that Apple has made public, Hawkins calculated that each app earns, on average, about $4,000.

"Four thousand per application: Do you see a problem with that?" he asked the audience. "That doesn't even pay for a really good foosball table."

Apple said Wednesday it has doled $2 billion out to app developers, which could put the average payout closer to $5,700. Either way, Hawkins said he believes the math makes it difficult for creators of apps to turn a profit.

"If we can't figure out how to make it a healthy ecosystem, it's not going to be a great business for developers to be able to remain employed in," he said.

Gaming giant Nintendo, maker of the popular Wii system, focused much of its message at the conference on condemning the prevailing model for smartphone games.

"The objectives of smartphones and social-network platforms are not at all like ours," Nintendo President Satoru Iwata said in a GDC keynote. "Their goal is just to gather as much software as possible, because quantity is what makes the money flow. Quantity is how they profit. The value of video-game software does not matter to them."

Two of Nintendo's top executives echoed that sentiment in interviews this week.

Discussing inexpensive mobile games, Nintendo of America President Reggie Fils-Aime said: "The only thing that concerns us is that it becomes a distraction for developers, and it ends up driving development effort down a path that potentially has very little return."

In other words, Nintendo executives said, selling wares cheaply in a crowded online bazaar is a long-term recipe for failure.

"When I look at retailers, and I see the $1 and free software, I have to determine that the owner doesn't care about the high value of software at all," Iwata said in a presentation Wednesday, the same morning as Apple's iPad 2 news conference in the building next door. "I fear our business is dividing in a way that threatens the continued employment of those of us who make games."

But Hawkins, the EA founder, said he believes Nintendo is not blame-free, either. The Japanese gaming behemoth upended the industry decades ago when it instituted fees associated with developing and selling software for Nintendo's systems, he said.

After an approval process, Nintendo makes developers pay a toll for access to certified equipment for testing purposes. The company also takes a royalty fee on each unit sold -- set so high that the costs lock out small development shops, some programmers say.

The practice has thrived and has been emulated by others, including Microsoft and Sony Computer Entertainment.

"We used to have a free and open game business," Hawkins said. "And then Nintendo came along and introduced a thing called a licensing agreement."

Apple charges developers a subscription fee of $99 per year and takes 30% of each transaction. Apple has touted in previous news conferences that it sells more gadgets capable of playing games than any major game company.

In 2009, Hawkins sang Apple's praises after Digital Chocolate developed several hit games for the iPhone. He called it "a spectacularly pleasant surprise" in an interview with VentureBeat.

But Thursday, Hawkins was much more critical. Apple has pitched its App Store to game developers as a place where there's "no tyranny from publishers, no tyranny from Walmart," he said. But the store's overcrowding is another problem, because it makes it hard for most games to get noticed, he added.

"At least Nintendo had the courtesy to tell you upfront that you were going to be screwed."

Nintendo, along with the other big game-console makers, invests in ways to encourage small, independent developers to build games for its systems. Nintendo has digital stores, called Ware, for the Wii and DSi hardware, and they have "minimal barrier to entry," Nintendo's Fils-Aime said.

But so far the company has produced no success stories that rival the likes of "Angry Birds," the blockbuster mobile game.

Fils-Aime acknowledged that there is "lots of room for optimization" with Nintendo's digital-retailing channels. "We've got to do a better job of marketing it.

To bolster those efforts, Nintendo is readying an eShop retail store for its upcoming 3DS hand-held 3-D gaming system, he said. But it won't be ready in time for the March 27 launch.

For budding game developers, there are no easy answers.

PopCap Games CEO Dave Roberts said a "slow" and cautious approach to development has worked for his 10-year-old company. PopCap is responsible for the hit cell-phone games "Bejeweled" and "Plants vs. Zombies."

"We're really excited about mobile and social (network-based) games, but we're not on the bandwagon," Roberts said. "We're not trying to drag people to new platforms."

Hawkins, the seasoned game maker, offered this solution for developers: Focus on Web-based games, where the developer can control every mode of distribution and transaction.

"There is a place that we can all gravitate to over the years," Hawkins said. "Think more about the browser. The browser will set you free."