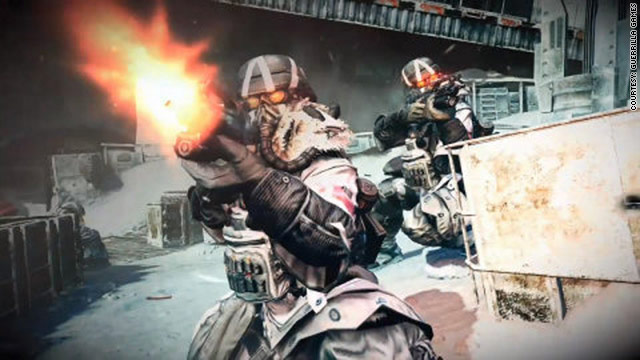 (CNN) -- "Killzone 3," in stores this week, is one wild, rolling firefight. Set across many different terrains, it challenges players to show off their mental capabilities as well as their shooting prowess.

The first-person shooter (Sony, Guerrilla Games) picks up where "Killzone 2" left off, with the opposition leader dead and a city in ruins after a nuclear bomb goes off.

The gameplay quickly becomes run-and-gun, as players race to get out of a war zone where they are vastly outnumbered.

The Helghast, sort of a futuristic pseudo-Nazi/Cold War Russian looking group, are on the trail of our intrepid heroes through a nuked-out city, leafy jungle, polar mountains and outer space.

Each setting presented its own challenges and really varied the tactics needed to survive.

Guerrilla Games producer Kyle Shubel said the team spent the two years in production listening to fans about what they liked and didn't like from the series. He said the gaming engine -- the software system that runs the game -- remained the same as "Killzone 2," but that this time developers had the time to do more with it.

"The fans requested so many things," he said. "But being given time to respond has been a strength. We really wanted to squeeze more out of the engine and we think we've done it."

The environments play a big role in gameplay, as buildings and roads crumble under the weight of armored vehicles in the city or darkened areas hide players from enemy eyes as they sneak through the jungle.

All are well rendered and help get players immersed in the action.

The jungle missions were probably the most fun and the most mentally challenging. Players are forced to get stealthy -- and when I say forced, I mean it.

The bad guys are so overwhelming that when I got spotted, there was no chance of survival despite being well-armed. However, the slow, methodical movements were a nice change of pace from running from building to building for survival.

The boss battle with the towering MAWLR, a mechanical walker that could only be slowed down by shooting its exhaust ports (Death Star, anyone?), was as frantic and bombastic as the jungle was slow.

Attacks are needed from the ground and from the air to stop this beast and don't let your guard down for a second.

The polar mission and the outer space mission showed off some of the vehicles you'll get to use. I thought the ice-saw cycle in the snow regions was not as much fun as it could have been.

Piloting space fighters to take out battle cruisers wasn't new, but it was exciting to play.

Jet packs helped hopscotch around the battlefield and reach places that couldn't normally be reached. The EXO walker (think "Aliens") was bulky and hard to manage, but offered a big punch when needed.

Shubel said each environment was designed to have its own style of play and its own set of missions. He explained that emerging technology allowed them to ramp up the look of "Killzone 3" from its predecessors.

"We learned a lot and worked on leveraging new technology. It allows us to do a lot of cinematic tricks that Hollywood does in blockbuster movies."

There are plenty of cut scenes to help round out the story and move it along.

The Helghast leaders, voiced by Malcolm McDowell and Ray Winstone, are brutal and methodical in their destruction of the Interplanetary Strategic Alliance. The interaction between the two leaders builds to a resounding, if perhaps expected, crescendo.

Single player action took about 7 hours for me, but Shubel said 8 to 10 hours was normal for completion. Split-screen co-op for two players is also available for offline play.

Online, there are three game modes that can support up to 24 players for some of the missions. Five different classes are available: Marksman, Engineer, Medic, Tactician and Infiltrator. Each can earn points during the matches to improve their abilities and weapons.

The Infiltrator and Marksman were the most interesting to play. The Infiltrator can disguise himself as a friendly trooper until right before he slits your throat. The Marksman is a sniper who can remain nearly invisible until an attack is made.

Shubel said the development team spent a lot of time working on balancing out the power for each class so no one has an overwhelming ability to tip the scales in the fight. It does take team work from different types of players to be successful in the multiplayer modes.

The game also can be viewed in 3-D.

During a demonstration in Washington, I got to play using 3-D technology and a new peripheral (a gun-shaped controller) called the Sharp Shooter.

The 3-D aspects didn't really benefit gameplay, but they did make the game graphics a little bit better. The Sharp Shooter, an attachment to the Sony Move controller, ended up being a lot more fun than I expected.

Ultimately, I would prefer to play with the Sixaxis controller. However, I could easily see the game being played by a new person with the Sharp Shooter for more enjoyment than a regular controller.

"Killzone 3" isn't going to blow the doors off other first-person shooter games, but it does offer a variety of missions, scenarios, and skills that make run-and-gun gaming enjoyable. There were very few disappointments and the multiplayer action was just as exciting as the single-player.

And, of course, there was a cliffhanger ending so be prepared for a "Killzone 4" in a couple of years.

"Killzone 3" is a PlayStation 3 exclusive title. It is rated M for mature audiences due to blood and gore, intense violence and strong language. This review was done on the PS3 using the Sixaxis controller for single player and the Move controller for multiplayer.