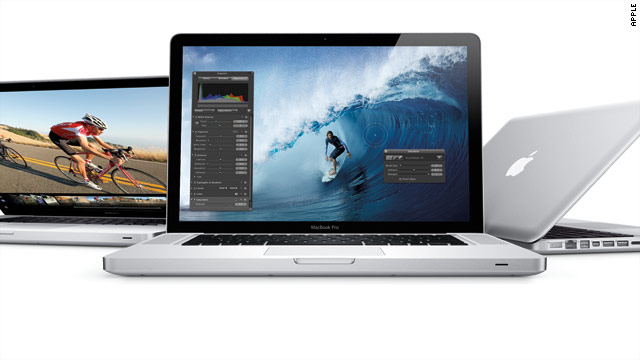 (CNN) -- Apple on Thursday morning unveiled a new line of high-end laptop computers that's about twice as fast as the older generation, according to the company.

The MacBook Pro laptops get a speed boost from faster Intel processors, which can reach "Turbo Boost" speeds of 3.4 gigahertz. In nongeek speak, that means the computers can complete 3.4 billion calculations per second.

The laptops also are the first computers to feature Intel and Apple's "Thunderbolt" technology, which is a new way to connect cameras, camcorders and the link to the computer -- an alternative to USB ports, which are ubiquitous today.

Apple says these new ports are much faster than existing alternatives.

"Ultrafast and ultraflexible, the Thunderbolt pipeline is more than 12 times faster than FireWire 800 and up to 20 times faster than USB 2.0, and it offers unprecedented expansion capabilities. It changes what you can do on a notebook," Apple says in its advertising materials.

The new laptops also have USB and FireWire connections.

The MacBook Pro computers -- some of the most expensive laptops on the market -- start at $1,200 for a 13-inch model and go up to $2,500 for a computer with a 17-inch screen, when measured diagonally.

The computers come with Intel's Core i5 and Core i7 dual-core processors. Their speeds range from 2.0 to 2.7 gigahertz but can jump to 3.4 gigahertz, the company says. Apple claims these processors make the new MacBook Pro twice as fast at processing data and three times as fast at rendering images.

Another new feature of the laptops -- which, from photos, look almost identical to their predecessors -- is the addition of a FaceTime video camera. This will allow MacBook Pro users to conduct video chats with people on mobile phones and iPods that support Apple's FaceTime video chat app, which is similar to Skype. Previously, iPhone 4 FaceTime users could only chat with each other -- not with people who were using laptops.

"FaceTime for Mac makes it easy to talk, smile and laugh with friends and family on their iPhone 4, iPod touch or Mac," Apple says in an ad for its FaceTime app for the Mac, which costs 99 cents.

Some Apple fans were initially disappointed by the specs of the new laptops.

"I have to say it looks like they just wanted to get this out of the way and move on to the actual main event, the iPad 2. iPad is the future," one commenter wrote on the blog Apple Insider.

Another complained that Apple updated the MacBook Pro series instead of the MacBook Air, which is a lighter laptop that boots up instantly.

"I'm sure many will be thrilled by the speed, but I'm majorly disappointed. ... My hopes for a MacBook Pro Air have been dashed.... Maybe next year ...," another commenter on that blog wrote.

Others weren't wowed by the computers' screen resolution.

"Reeeaaallly disappointed with the 1280x800 resolution? Why??" wrote a commenter on The Unofficial Apple Weblog, or TUAW.