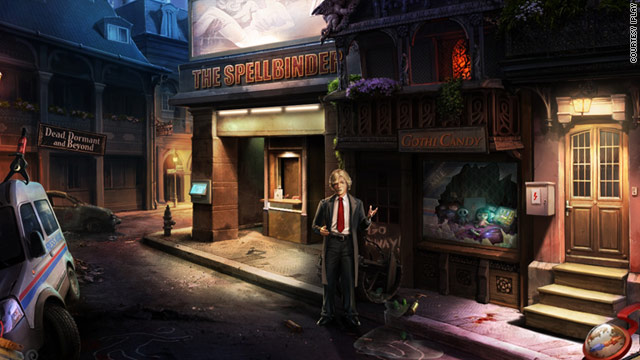 The author of the Sookie Stackhouse series of supernatural thrillers is moving into video games.
STORY HIGHLIGHTS
RELATED TOPICS

(CNN) -- The author of the Sookie Stackhouse series of supernatural thrillers and inspiration for HBO's popular drama "True Blood," Charlaine Harris, is putting her eye for suspense toward an equally arresting subject: Video games.

Produced for iPlay, the fruit of her labor, downloadable PC puzzler "Dying for Daylight," features an original tale starring Dahlia, a wisecracking, fashion-forward vampire hunting for a potion that lets vampires survive in sunlight. A hidden-object game designed for casual play by both women and men, it aims to bridge the gap between paperback readers and gaming fans, leveraging Harris' gift for crafting clever characters and scenarios.

Now that she has contributed to one of a growing range of collaborations between the gaming and publishing industries, we asked Harris why critics haven't written the final word on interactive entertainment's potential to craft compelling narratives yet.

CNN: How do video games compare to books and TV as a storytelling medium?

Harris: Video games are visual like TV, but involve a certain amount of comprehension that TV often doesn't. It's a refreshing change from both books and TV, I find.

CNN: What key differences are involved in writing for passive and interactive formats, e.g. novels vs. games?

Harris: For me, writing books is about the progression of the characters as they change to meet circumstances on their way to the climax of the book. Games seem to have a more clearly cut goal and to require little change on the part of the character you're maneuvering through the stages of the game. Since I have discovered I'm really linear, the one step forward, one step back structure of games was at first very frustrating; you don't keep going forward but are having to go back to get this item or that item. Perhaps it's more like real life in that respect!

CNN: Many authors, such as Stephen King, Harlan Ellison, Michael Crichton and James Patterson have dabbled with gaming in the past. Will we see more embracing the format going forward?

Harris: I'm sure more will, simply because it's another way to publicize your books, after all. And it's a fresh and fun market for many writers; the chance to do something different is always interesting.

CNN: Digital seems to be the watchword for authors these days. Do you believe games and interactive fiction, like Kindle Singles, eBooks and other virtual platforms, may someday reinvent publishing?

Harris: I'm certain digital will permanently alter the publishing industry. I hope that books will not completely go by the wayside, but I fear they will. I love to hold a book in my hands, but I can't deny it's much more convenient and green to have all my books on one device and to be able to take that device with me when I travel, instead of bulky and heavy books. For that time alone, eBooks are worth it. And the same thinking applies to all the other uses. Portable is the way the world is going.

CNN: Knowing this, are games becoming a better medium both artistically and commercially than typical channels such as books, essays and short stories for writers to make their mark?

Harris: No, not yet. Short stories put your name in the path of the reading public, and therefore publishers. Publishers will take you much more seriously if you've had several short stories in reputable markets like magazines or anthologies. I don't know how much credence they'd put in a book proposal by a writer who'd written games, but I'm willing to believe that is mounting. I think any way you can get published is good though, as long as you're getting paid for it. I don't know if games have the power to create a career, but they certainly could add to one.

CNN: What do titles like "Dying for Daylight" allow you to do that you could never accomplish with print media?

Harris: I'm hoping that people who enjoy playing the game will decide to read my books, naturally. This is a chance to reach out to a whole new audience. Also, it's simply fun for me.

CNN: How do you foresee the worlds of literature and gaming continuing to collide in the future?

Harris: I'm sure that mystery, with its defined structure and clear goal, is a great genre for gaming. Science fiction, with its "quest" structure, also adapts well. I think more and more of the big names in those genres will come to the adventure of gaming with good ideas and I look forward to seeing that.