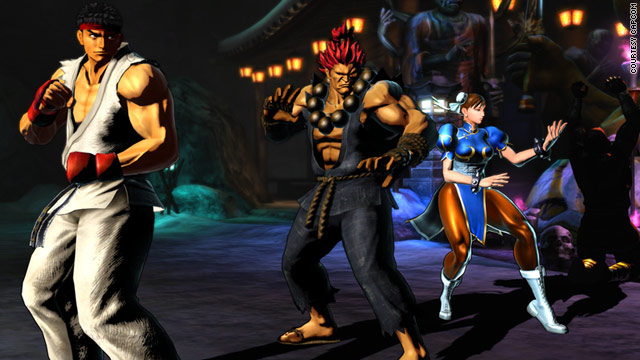 (CNN) -- As one of the most anticipated games of 2011, "Marvel vs. Capcom 3: Fate of Two Worlds" (Capcom) doesn't disappoint with new characters, a story line with uber-villain Galactus and a new mode designed to make it easy to get involved in the action.

After a 10-year hiatus, the popular fighting game brings the battle zones into the third dimension. While action remains in two dimensions, the characters are generated in 3-D and provide for a more robust visual image of the fighting.

Each fight can be one-on-one or tag-team, with three characters on each side.

One of the biggest question marks as the game's release neared was who would be in and who would be left off of the Marvel and Capcom casts.

Seth Killian, special combat adviser for Capcom, said the company wanted to achieve a balance between Japanese and Western characters.

Thirty-six characters are playable right away, with two more available as downloadable content. Signature characters like Spider-Man and Ryu make their return, but only comic book fans may recognize some of the other characters.

"We included the Super-Skrull because we couldn't have the Fantastic Four and we wanted to have them represented somehow," Killian said. "We chose Marvel characters that Japanese fans would think were cool."

"With so many moves and abilities, it becomes more strategic," he said. "Which characters can I choose to cover up some weaknesses, or do I just play to my strengths? It is up to the player to figure out how to use them."

The fighting system, while criticized in past versions for the complex button mashing and joystick gyrations required to achieve moves, has also been retooled.

In an effort to gain fans and reach out to more casual players, the game can be played in simple mode, where only three buttons are needed to attack an opponent. This affords new fans who may be familiar with the characters, but not the game, the ability to get into the action right away.

"We really wanted to make the game easy to get into," Killian said. "Simple mode gives you three attack buttons: light, medium and heavy. There is also one 'hyper combo' and two special attacks. That's it. By contrast, [Capcom character] Dante has 35 different attacks in the normal mode."

A "mission mode" helps players learn the normal attacks, if they want to. The missions take characters through different stages where they work on a particular attack to get its sequences right.

"It took us three years to develop the game, and a lot of that time goes into balance and technical," he said. "We've designed it for the long term and really think fans are going to enjoy how it plays."

Arcade mode is where the story line comes in.

Each universe's top bad guy -- Dr. Doom for Marvel and Albert Wesker (from "Resident Evil") for Capcom -- decides to join forces to beat the good guys and rule their respective domains. However, as big, evil plans often turn out, their efforts are recognized by someone even more powerful than they are: the world eater Galactus.

Galactus decides he wants both worlds, and the heroes and villains from each must unite to defeat him. Teams of three characters each do battle against each other to determine who will be strong enough to take on the galactic titan.

Killian said a unique ending sequence plays out for each character after the final battle, and each has alternate uniforms and dialogue that are unique to the character's persona.

Nonplayable characters will also make appearances during the story line to add flavor and interest in the mission.

Characters also have powers and abilities that come out only during specific times in a battle. For example, Marvel's Phoenix will transform to Dark Phoenix after her life bar runs down. This includes more powerful attacks but costs Dark Phoenix in life points as time goes on.

The way difficulty can be scaled down should win over new fans while allowing more advanced fighting players to jump right in.

Simple mode took me through the battles quickly and let me get familiar with some of the new abilities and characters. Jumping into mission mode helped me learn moves that I utilized in normal mode and made the action even more vibrant.

Capcom also hit the mark with interesting voice and movement additions for each character that really heighten enjoyment of the game. Deadpool's taunting and breaking the fourth wall to speak directly to the player were unexpected and very funny.

Sure, some are going to quibble over which characters were included and which were left out. But with 36 to choose from, it will be hard for players to not find a character from either universe they'll enjoy playing.

It all works and will provide hours of enjoyment, even after Galactus is defeated. And with more downloadable content promised, we won't have to wait 10 more years to use Hadouken (for the uninitiated, that's a special attack) on new opponents.

"Marvel vs. Capcom 3: Fate of Two Worlds" is rated T for teens. It was released this week for the Xbox 360 and PlayStation 3 consoles. This review was done with the Xbox 360 version.