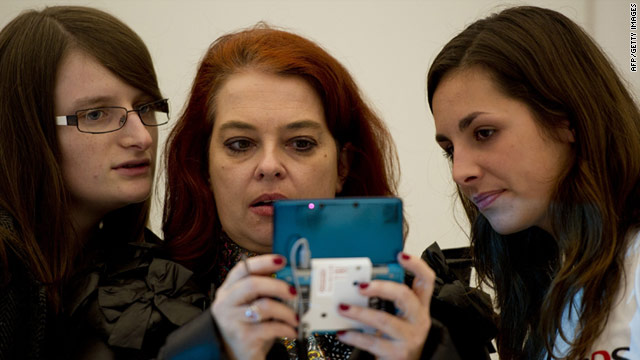 (CNN) -- Even while you sleep, next-generation portable game systems will keep updating themselves.

To compete with touch-screen smartphones and tablets and their perpetual internet connections, Nintendo and Sony Computer Electronics are putting always-on wireless connectivity at the forefront of their new dedicated gaming devices.

Nintendo's 3DS device goes on sale in late March. It will be followed by Sony's tentatively named Next Generation Portable, or NGP, which is supposed to launch late this year.

Putting aside Nintendo's innovative 3-D-without-glasses technology and Sony's hyper-touch-sensitive hardware, what both of these new game systems share, and what could have the greatest impact on how they're used, are potent internet features.

Here's a closer look at what the two devices offer.

Whereas Nintendo's 3DS is designed to connect directly with other systems in its vicinity and constantly search the airwaves for nearby Wi-Fi hotspots, Sony's upcoming system takes a page out of the smartphone and tablet playbook.

Sony's successor to the PlayStation Portable will have a 3G wireless data chip inside. Users will be able to connect to a cellular network to download game files, talk to friends or challenge them in games. Sony hasn't announced pricing or which carriers would support the system.

In addition to the cost of the hardware, owners will probably have to pay a monthly service fee to connect to a cell network. AT&T subscriptions for Apple's iPad, for example, cost $15. The 3G function will be optional, Andrew House, Sony Europe's chief, told the blog Eurogamer.

Nintendo is taking a roundabout approach to giving its 3DS an internet connection. The company developed a program called SpotPass, which cleverly tests the limits of Wi-Fi.

The current generation of Nintendo's DS systems requires the user to dig through a series of menus in order to enable Wi-Fi functions and connect. Nintendo offers a website for locating hotspots.

A 3DS with SpotPass, however, attempts to figure out which, if any, is the best hotspot available and then automatically logs on.

Once online, the SpotPass software may talk to Nintendo's network to see whether, say, any game updates are available or any friends are playing at the moment. All of this can happen when someone's 3DS is tucked away in a pocket or backpack.

Sony's networking method will be more reliable than Wi-Fi because it takes advantage of a sophisticated cell network rather than a mixed bag of unprotected hotspot broadcasts from nearby homes and restaurants.

But Nintendo's service is expected to come free with the $250 system when it launches, allowing users to connect easily at almost any coffee shop.

With both game companies putting more persistent online access as a priority in their new systems, expect more social games.

Game development studios are mulling new ways to connect players and plan to adopt features from smartphone apps. These include downloadable extras and statistical ladders for comparing scores and in-game achievements.

Apple CEO Steve Jobs has boasted in presentations, almost as a footnote, that the iPhone and iPod together have overtaken products from Nintendo and Sony to become the No. 1 portable gaming platform.

Yet, despite the unprecedented popularity of smartphone games like "Angry Birds," there may still be a strong future for dedicated handheld gaming devices, if sales forecasts and excitement online are indicators.

Competing with phones and tablets

For their parts, Nintendo and Sony executives say mobile apps pose no threat to their gaming efforts. Though casual gamers may kill down time playing on their phones, they are not the core consumers for long-form games that these companies target.

Google, with its Android system, and Apple have done well to attract game makers by providing a comparatively open environment for developing and selling software. But those platforms have struggled to attract the blockbuster immersive games from major studios that buttress systems from Nintendo and Sony.

Smartphones lack the control schemes optimized for many types of games. Although the graphical processing power of phones are constantly improving, a simple touchscreen can get you only so far.

But Sony covered its bases last week when it also announced a service called PlayStation Suite for Android's smartphone platform. With that, Sony would be able to license or develop, in partnership with Sony Ericsson, games to be played on phones.