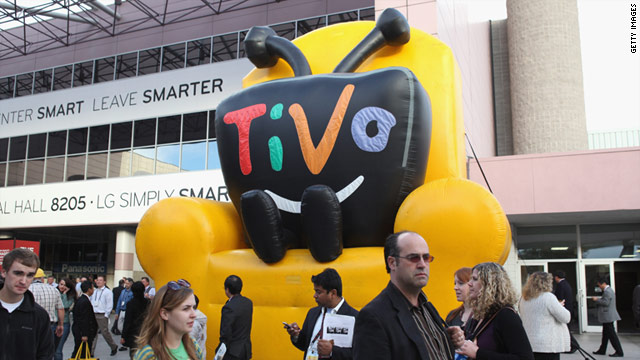 In an interview at the Consumer Electronics Show, TiVo outlined plans for getting its devices in more homes.
STORY HIGHLIGHTS
RELATED TOPICS

But the company's hot-and-cold relationships with cable providers is complicating the fate of TiVo's digital recording and video-on-demand services.

In the early 2000s, TiVo amassed a devoted following of consumers who praised its simplicity. The device marked a leap forward from VCR machines, and for TV junkies, it was well worth the upfront cost for the hardware and the subscription charges.

But in the last few years, cable and satellite companies have caught up with the demand for video recorders. Many offer free proprietary boxes, which can do both channel programming and the DVR function, and make money through additional usage fees.

TiVo's subscriber base peaked in 2006 and has been declining since, according to TV by the Numbers, an industry news blog.

TiVo's response to this slump has been two-pronged. For one, the company has scrambled to sign deals with TV service providers. TiVo announced one such milestone agreement with UK cable giant Virgin Media, in which TiVo will be the platform developer.

In the United States, cracking big cable companies has been harder to do. Most of the biggest cable providers here have ignored TiVo in favor of building their own DVR systems and controlling the revenue. TiVo does have a deal in place with Comcast, but it only applies to some cities, and TiVo is not the primary DVR option.

"Where they get most of their volumes is in going to tier-two cable providers," said Todd Mitchell, a Kaufman Bros. media analyst.

These smaller companies generally don't have the resources to invest in homebrew DVR solutions, so they're happy to offer TiVo's services to customers. TiVo also develops complementary applications for smartphones and the iPad.

"It's a major strategy for us now to align ourselves with the cable industry, whose interests are what our interests are," TiVo CEO Tom Rogers said in an interview this month during the Consumer Electronics Show.

For the major cable companies who were not willing to play ball, TiVo presented them with something else -- lawsuits. TiVo sued AT&T and Verizon in 2009, and that litigation persists. TiVo also sued Dish Network satellite owner EchoStar in 2004 for a similar alleged patent infringement and won.

Through a spokesman, Rogers declined to talk in detail about lawsuits in progress.

TiVo's longtime strategy of selling its hardware in stores is no longer the company's priority. Its newest box, called TiVo Premiere, can replicate a cable box's on-demand services and pull in internet content for a monthly subscription fee.

But TiVo Premiere has gone largely unnoticed in the market since going on sale last spring.

Meanwhile, dedicated internet TV boxes from Google, Apple, Roku and Boxee are drumming up buzz. Apple has sold more than a million of the new $99 Apple TV devices, which let users stream content from iTunes.

The TiVo CEO's take on Google TV was even less forgiving, implying that Google lacks the corporate DNA to deliver on its product's promise.

"Being able to use your television set as an internet search appliance really isn't what people think of when they come to the TV," Rogers said. "They're looking for a TV experience, something that's really unique to television. ... And that's something that you have to be very television-focused, very television-centric, to deliver."

TiVo's pairing with cable companies might be the safer business move, said Mitchell, the analyst. If the past is any indication, consumers don't like the idea of buying a second piece of hardware for video, in addition to their cable box.

"The model has shown us that two-box solutions don't work," Mitchell said. "The whole idea of Apple TV and Google TV -- so far, the market has said we don't want a two-box solution."

But TiVo is distancing itself further from hardware competitors by not targeting this group. Rogers believes cord cutters comprise only about 1% of the TV market, although it could grow to 10% in three years, he said.

"I don't think anybody quite knows how prevalently that's going to play out," Rogers said. "The notion is that over time, people may discover that they don't need to subscribe on a monthly basis to somebody giving them a package of channels if they can get what they want via broadband."

With pushback in courts, retail sales evaporating and a new pack of technology competitors, TiVo has plenty of hurdles ahead. But the company's biggest challenge, according to Rogers, might surprise you.

"Our biggest issue is getting people to understand what TiVo now stands for," he said, referring to its on-demand systems or software that can transfer recorded video to laptops or mobile devices. "I think the biggest issue we need to overcome is when people hear 'TiVo' ... many still think 'recording device.'"