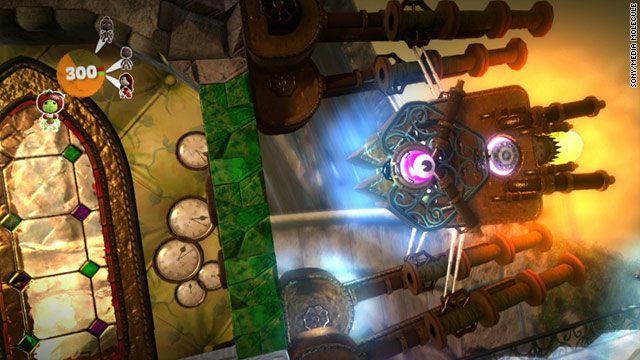 Media Molecule, the team that developed "Little Big Planet," takes another crack at opening the imagination of players with new challenges, weapons and rides. The hero, Sackboy (or Sackgirl, depending on the gender you choose), returns to tackle a single-player story that has a plot, supporting characters and villains.

In "LBP," players took their Sack avatar through different levels, based on real-world locations. In "LBP2," the world has been overrun by the forces of evil and destruction, and Sackboy is recruited by the Alliance, a group that wants to restore goodness, and cupcakes, to everyone.

The first thing I noticed in the single-player actions was the voices created by real actors. During gameplay in "LBP," characters just muttered or grunted while speech bubbles spelled out what they were saying. Now, the nonplayer characters' voices lend extra atmosphere to the scenes.

Sackboy still bounds through an obstacle course of physical challenges. He gets some new tools, such as gloves that help him lift and toss large items, and a grappling hook that shoots out to get him over and around larger chasms.

The object is the same as the first game: Collect point bubbles and materials to dress up your Sackboy or the surrounding scenery with stickers. The action is whimsical, with a dash of British humor, and there are some laugh-out-loud references if you pay attention.

The additional fun comes from making your own levels. Indeed, Alex Evans, one of the co-founders of Media Molecule and technical director on "LBP2," said that players from the first game wanted more options to be able to share their own creations with others.

"It was the number one request of the first game," Evans said. "It was, 'Oh, I spent the weekend making a shrine to my cat. How do I advertise it? How do I reach an audience?' "

Evans said they created a feature in the game that creates a URL for each level players make, so they can put it on Facebook or Twitter or in an e-mail. In this way, gamers' amazing levels are seen by a wider audience and hopefully inspire others to do the same.

"What we were amazed at the first time around was that there was actually really good content," Evans said. "So we definitely learned a lot, and we've got a lot more recommendations to guide [players] to those levels that are likely to appeal to you."

Those who want to create will find new tools and tricks to make their imagination come to life much easier. Evans said these tools have been used in creative ways that developers never imagined.

"I've always been so pleasantly surprised by not patronizing gamers," he said. "There is this untapped potential of the community that never ceases to amaze me in a very good way."

Most of the original creations from "LBP" were what Evans called "homages" to other role-playing games or classic platforming games. With the addition of new tools like the Create-a-nator, which lets Sackboy make whatever he needs to solve a puzzle, new community levels are expected to be more expansive and imaginative.

There are also vehicles in "LBP2" that have their own abilities and powers. Sackboy can ride a bouncing puppy with a sonic bark, or a multi-humped camel that shoots missiles out of his mouth.

It is also backward-compatible, meaning that anything that was created in the first game will play just as nicely in "Little Big Planet 2." Any Sackboy creation, including all materials and clothing, will automatically be loaded in "LBP2."

Overall, the new single-player story with real voice acting and nonplayer characters is a welcome change from a simple physics-engine platformer. While the story is as old as time, the action and the humor are fun, exciting and an excellent way to learn all the game's new tools and tricks.

The community (at the time of this review, it was filled with levels created by beta players) has a wide array of selections, from first-person zombie shooters to driving games to traditional platforming games. Media Molecule also has an area that recommends levels it likes.

Media Molecule really hit home with "Little Big Planet 2." The only way you won't enjoy this game is if you can't imagine having fun.