Lady Gaga: I carry a photo printer in my purse 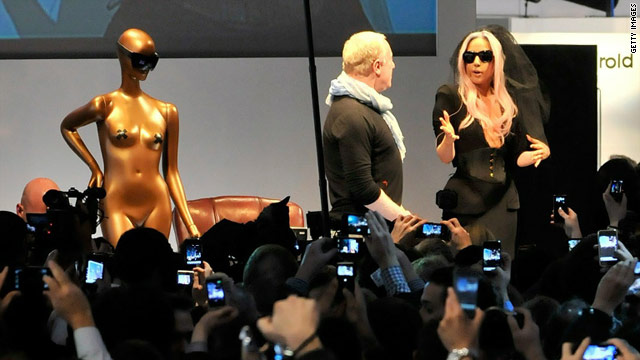 The mega-famous pop star came to the Consumer Electronics Show on Thursday to announce a new line of cameras and photo printers with Polaroid, where she is officially the "creative director."

Polaroid "really let me put my hands in there and design this s--- myself," she said.

Polaroid's Grey Label product line, which isn't available yet, will feature sunglasses with a camera embedded in them, a camera that shoots digital and Polaroid images and a portable photo printer that Gaga says she takes to bars with her -- in her purse.

"I suppose many of you are nerdy enough to carry around a mobile printer," she said, acknowledging the technophiles in attendance. "I know I will."

Wearing sunglasses, a black dress and a dark veil, Gaga looked somewhat like Jackie O at a funeral as she took a picture of the audience and printed it on the new Polaroid printer, which creates 3-by-4-inch images that look like classic Polaroids.

The presentation took place at Polaroid's booth on the trade show floor at CES. Canon -- a competitor -- had a booth and large ads set up within view.

The Polaroid GL20 image-capturing sunglasses, which are a protoype, store photos on a chip in the earpiece of the glasses. Lady Gaga said she had a heavy hand in designing the frames, which sat on a gold mannequin during the short presentation. The over-size glasses covered a good half of the mannequin's face, coming almost down to its lips.

"You can come to one of my shows and wear them," she said. "Take pictures of me dancing on stage."

The GL10 printer, available for $150 in March, connects to phones via Bluetooth, allowing for on-the-go prints. (It doesn't work yet for the iPhone, a fact that, when revealed by Gaga, got boos and cheers from the audience).

What CES devices interest you the most? Share your thoughts

The GL30 camera, which will be out by the holiday season, takes both digital and Polaroid prints. A future version will connect to the internet so the shots can be uploaded to social media sites. This version does not, she said.

"I think it's sexy, it's sleek and it's hearty," she said. "It's not heavy but it feels good in your hand."

In working on the Gray Label line, Lady Gaga said Polaroid asked her what she thought the camera of the future would be.

"This is!" she recalls responding, holding up her BlackBerry.

The new printer is intended to cater to this cell-phone-photo crowd. But many websites and apps now convert smartphone photos with filters, making them look like old-school Polaroids or like they've been taken with toy cameras. Those can be printed on any other available photo printer, although not always on-the-go.

Some techie attendees at CES waited more than an hour to see Lady Gaga's announcement, and at least a few started to grow restless when she took the stage more than 40 minutes late. While some of them booed the empty stage, others stood anxiously, holding their cell phone-cameras in the air for minutes at a time.

But Gaga wasn't first to take the stage. That was Polaroid Chairman Bobby Sager, who was greeted by boos from the audience.

He didn't seem to mind.

"This will be very quick because I know you don't want to listen to me," he said.