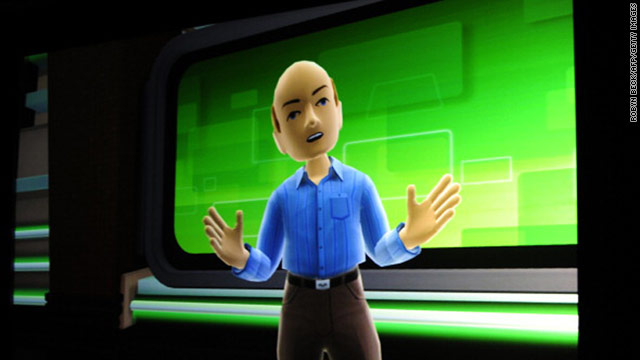 The speech by Microsoft CEO Steve Ballmer featured a look at his avatar created by Kinect's cameras.
STORY HIGHLIGHTS

Las Vegas (CNN) -- Microsoft on Wednesday announced plans to redefine television as a medium that viewers can control by waving their hands and talking rather than clicking on remotes.

In a speech to open the Consumer Electronics Show in Las Vegas, company CEO Steve Ballmer also said he aims to make TV more social -- letting viewers chat with each other as avatars in virtual settings and place live bets on sporting events from the TV screen.

Perhaps it's time to say goodbye to the old-fashioned couch potato.

At the center of this new vision for the living room is the Xbox 360, Microsoft's internet-connected gaming system that, thanks to an add-on called Kinect, can read and interpret players' motions.

"Your Xbox is becoming the hub of your living room," he said. "It is your gaming system. It is your movies. It is your TV experience."

Ballmer announced an update to that system that lets Kinect's cameras read facial expressions and mouth movements in addition to what their arms and legs are doing.

Called "Avatar Kinect," this new feature, which is due out in the spring, will allow friends to meet up as avatars -- or video-game likenesses of themselves -- in virtual settings. A demo of this feature showed avatars chatting at a virtual-world tailgate while sitting in digital, plaid lawn chairs. In another demo, female avatars got together on a neon set, as if they were collaborating on an online talk show.

CES: Preview the future of technology

Kinect's cameras watch the friends from the top of their TVs and translates their facial expressions into the digital hangout.

"As you can see now Kinect can track features like your smile, your laugh and even the raise of your eyebrows," Ballmer said, offering a demo of himself as a bald avatar -- his digital eyebrows bouncing up and down.

Ballmer described these virtual meet-ups as a "new way to socialize." But, even during his speech, some Twitter users wrote they found that idea downright creepy.

"Will it also track Eye Winks? or false eyelashes? What about coloured contact lens?" wrote another.

Others wrote that they're fine with non-Microsoft devices controlling their living room electronics experience. "Sorry Ballmer, my PS3 is the hub of my living room," one @cnntech Twitter follower wrote, referencing the Sony gaming system.

The Avatar Kinect feature is available only to people who pay a subscription fee for an Xbox Live membership, which costs about $60 per year.

Even without the avatars, TV is getting more social as it brings elements of the internet into the living room, Ballmer said.

Viewers can chat with friends on the TV screen during the game and place non-monetary bets about who they think will win. They can see how their predictions stack up against that of their friends and the Xbox Live community at large.

"Now I can make my picks and trash talk as I'm watching the game," he said. "Not on e-mail, not over text -- right in my living room on the TV."

This trend of internet-enabled, or "connected" TV is set to be a major theme of this year's CES, where TV makers from Panasonic to Sony are announcing app stores and other features that are designed to bring social media and Web experiences to TV.

Some of these companies work internet features directly into the television instead of requiring a separate gadget, as is the case with Microsoft's Xbox.

Others, like the Yap.tv app for the Apple iPad, aim to let another device provide a social experience that can supplement live TV viewing.

The idea of internet TV has been tried many times before but has never gone fully mainstream.

But Microsoft's internet-TV system does do one thing other don't -- full-body motion control. The company highlighted this point repeatedly, announcing partnerships, for instance, with Netflix and HuluPlus that let Xbox Kinect users control those video apps by waiving their hands and talking to the system to select and play movies.

It's a "new world of controller-free entertainment that you cannot find anywhere else," Forbes said. The company said it had sold 8 million Kinect sensors in 60 days, beating its goal of selling 5 million during that timeframe.

The keynote address also highlighted other Microsoft efforts, including Windows Phone 7 and the Windows PC operating system, which is in the process of being upgraded to work on a range of devices, including buzz-worthy tablet computers.

Microsoft is widely criticized as being behind the curve on developing an operating system for tablets.

The company promised an update to its mobile Windows Phone 7 operating system that will add copy-paste functionality and the ability to switch between apps more quickly.

Those features are already available from the two hottest smartphone ecosystems: the Apple iOS and Google Android.

Some bloggers and wrote that Microsoft hid its skeletons in the closet during the speech -- straying from tablets and smartphones, which are big topics with other companies. But Ballmer said Microsoft is looking to the future -- and that will include all tech platforms, not just personal computers. The company aims to "redefine what is really possible" with technology, he said.