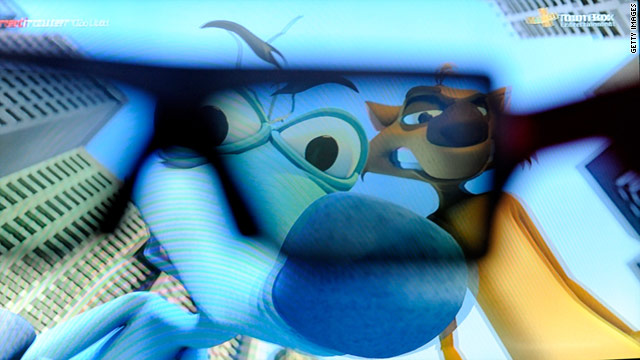 But, like many tech journalists and analysts, he's found 3-D TV to be completely "underwhelming" so far. There aren't many 3-D movies available at home. The images give people headaches. The glasses are nerdy, expensive and uncomfortable, since they use "active shutters" to toggle images between your eyes.

And it's pretty darn expensive -- with costs usually topping $1,000.

"Generally speaking last year was kind of a bust as far as 3-D TVs go," said Miller, who is a staff editor at PC World and who covers TV trends.

Others are harsher still.

"It's been an epic failure to date," said Kurt Scherf, principal analyst at Parks Associates.

Ahead of the massive Consumer Electronics Show here in Las Vegas, many tech writers expected TV manufacturers to shy away from the third dimension for these reasons and more. Only an estimated 3.2 million 3-D TVs sold worldwide in 2010 according to the NPD Group. That's far short of expectations. Why not cut the losses, move on to something else? Leave 3-D to the movie theaters, where it's been hot.

But it turns out TV makers and other consumer electronics companies aren't ready to give up this fight. Several are pushing ahead with new formats for 3-D TV, new 3-D content and lighter and cheaper 3-D glasses.

Some see this as squirming.

Others say it just takes a while for new technologies like this to catch on.

"I don't think it's dead. In fact I think it's going to be stronger this year," said Gary Merson, editor-in-chief of the site HDGuru.com.

TV companies are trying to distance themselves from negative impressions of 3-D TV by aligning with the movies, where consumers tend to enjoy the format more.

Several companies at CES, including LG and VIZIO, are touting "cinema display" 3-D -- for the home. These "passive" 3-D technology systems put most of the technical heavy lifting on the TV screen -- instead of on the glasses, as was the case with older models.

That may sound subtle, but it's significant, industry experts say.

For one thing, the "passive" glasses, which are polarized and don't contain electronics and batteries, cost far less than "active shutter" glasses, which were hyped last year.

The polarized glasses are essentially the same thing you get at a movie theater, and they cost about $10 instead of $100 or $200 for the electronic glasses, said Louis Rousseau, a spokesman for Sensio, a maker of 3-D technology.

The cinema systems also don't flicker -- a big complaint about the active lenses, which shutter open and closed very rapidly to try to send a different image to each eye.

The shutter lenses have the potential to induce headaches and nausea; and they don't work well unless the room is completely dark, said Miller.

The tradeoff: Polarized screens have a slightly degraded image quality.

Still, they're preferred by consumers by a wide margin, said Tim Alessi, LG's director of product development. LG plans to use "cinema" display in half of its 3-D TVs this year.

Other tech companies are pushing glasses aside entirely.

Nintendo and Toshiba are showing off glasses-free 3-D technology at CES.

But these devices make some sacrifices -- usually in screen size and user experience.

Nintendo's handheld 3DS gaming system will hit the market in the United States in March for about $300. It has gotten rave reviews from the tech press and has led some to say that the future of 3-D isn't the TV screen but is on phones and handheld devices.

Toshiba showed off a 56-inch prototype TV that tracks the viewers' eye movements and uses that data to create an image for each eye, producing a 3-D effect.

A smaller, 12-inch version is on sale in Japan.

The larger screen, which a spokeswoman said likely will not go on sale this year, got mixed reviews at the trade show.

"There was really only one good position for viewing its 3-D display, and that was dead-center in front of it," wrote Dwight Silverman from the San Francisco Chronicle.

"If you stood a little to the left or the right, the image [sic] come out of sync. I found myself wishing I actually had some 3D glasses!"

For consumers who like 3-D displays, there's still another huge problem with the 3-D TV market today: There's almost no content to watch.

According to DisplaySearch, there are only 40 Blu-ray 3-D titles out. ESPN has done some test broadcasts of sporting events in 3-D, but such broadcasts are rare.

That may change somewhat in 2011, analysts say.

Vudu, an online video company, announced a streaming 3-D movie service at CES, for example. Discovery, IMAX and Sony have joined forces to launch a 3-D network later this year. And ESPN just announced that its 3-D channel will begin broadcasting 24 hours a day next month, although little of that content will be live.

But don't expect tons of 3-D content to appear out of thin air.

"I still think it's going to be gradual but they're dealing with a chicken and egg problem," said Miller. "If there's not a lot of 3-D sets out there then they have not a lot of incentive to produce 3-D content."

Merson, of the TV blog, said a lack of content is 3-D's "biggest problem."

Last year at CES, companies pushed 3-D TV hard, talking as if it would be a replacement for HDTV -- something that most American consumers would have in their living rooms in the not-far-off future.

They've backed away from those claims this year.

Now they see 3-D as a feature -- something for special occasions and, for now at least, for the early-adopter tech crowd, not the masses.

"The people that bought the first 3-D TVs, they're the tech geeks," said Rousseau, of Sensio. "For you and I and my mom and dad to adopt this technology, it has to improve."

Rousseau sees the start of those improvements happening this year at CES.