Five nuggets before start of CES 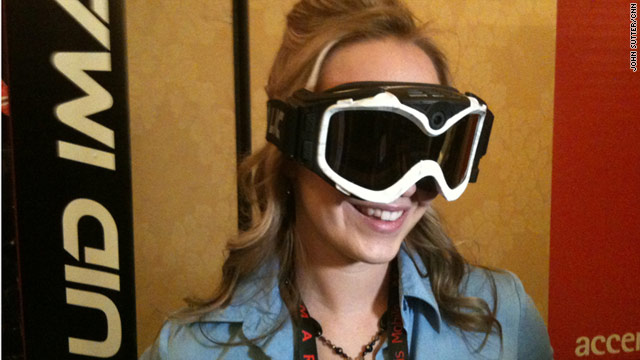 Among the gadgets shown at pre-CES events is these ski goggles that have a built-in HD camera.
STORY HIGHLIGHTS

On the eve of the largest gadget conference on earth, CNN was here in Las Vegas to figuratively shake the presents under the tree and eavesdrop on gift givers to try to figure out what will define this year's show.

Many companies will be unwrapping their big-ticket items at their own news conferences on Wednesday, with still more to debut at the Las Vegas Convention Center starting Thursday.

In the meantime, we put together a list of gadgets and applications that stood out from the crowd at the pre-show events on Tuesday. 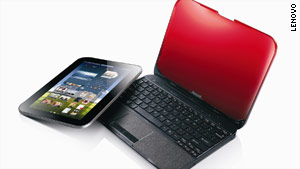 This Lenovo device is both a laptop and a detachable touchscreen tablet.

Tablets are hot, and Chinese computer maker Lenovo managed to draw crowds to its booth at CES Unveiled with one of its own.

The LePad hardware is a spitting image of Apple's iPad, but the software is anything but.

The touch-screen tablet runs a version of Google's Android that's been heavily retooled and not necessarily for the better. It splits the application list into two tabs: work and play. The former consists mostly of productivity software, and the later has a heavy focus on multimedia.

But the LePad is rooted in Lenovo's comfort zone. The tablet acts as the screen for a IdeaPad U1 hybrid laptop running Windows 7. Users can then detach the LePad from the clamshell hardware to tote it as a touch-screen gadget.

The transition from the Android software to the more desktop-centric Windows 7 can be jarringly slow. But this is a prototype. The final version will be available in China first and in other countries later.

The LePad was one of the only tablets we got to touch on Tuesday, but expect plenty more in the next couple of days. We've already had sightings of some from Motorola Mobility and Vizio.

CES: Preview the future of technology

A blood pressure reader that tweets

Withings is in the business of connecting unexpected stuff to the internet.

On Tuesday, the company announced a smartphone-connected blood pressure monitor that transfers home blood pressure readings onto the iPhone. Users then can send that data to a doctor, personal trainer and friends on social networks.

The app charts a person's blood pressure over time, giving doctors more-granular data about a patient's health and letting the product's users watch these changes, too. The effects of stress, eating and exercise on a person's health start to materialize in the app's charts, letting users see otherwise invisible connections, said Withings CEO Cédric Hutchings.

This became apparent as Hutchings demonstrated the device during a pre-CES event for the media. His blood pressure at this high-stress event: 119/78. The day before: only 100/66.

The Smart Blood Pressure Monitor will be available at the end of the month and is expected to cost $129.

Making a home movie of a ski trip used to be a dangerous endeavor -- one that requires skiers to hold a camcorder in a mitten while looking through a tiny camera viewfinder and careening down the hill.

While it's not the safest of practices, some new products are making this high-speed art more practical.

A new pair of ski goggles from Liquid Image is equipped with a high-def video camera between the eyes. Click one button on the side of the lenses to turn the camera on. Click another to start shooting. A tiny blue light inside the goggles tells you it's working.

"I can see it's recording, but it's not going to distract me," Christina Groff said as she demonstrated that feature on Tuesday. "So I'm not going to get distracted and run into a tree or something."

The ski and snowboard goggles are expected to sell for $250 to $400 (you get 1080p resolution at the top of that range) and will hit stores later in January.

An app for TV socializing

Software generally isn't a hot commodity at CES. But we found a bunch of app developers showing their wares at the pre-show events.

One standout is called Yap.tv. The iPad app is a self-contained social network for television junkies. Plenty of apps are targeting TV fans, including Miso and GetGlue.

With Yap.tv, in addition tying into personalized Facebook and Twitter feeds, it has functions for text-chatting with friends during a show and a very attractive channel guide.

For the TV obsessive, trying to talk shows on more generalized social networks -- like Facebook and Twitter which are sometimes called "horizontal" networks -- can be a challenge.

Adding to Yap.tv's iPad app, the company released a version for iPhone last week, with a revamped website and Android app on the way.

A small speaker that likes to lay flat 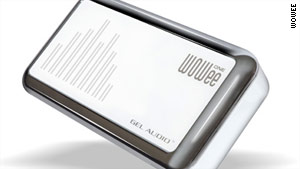 WOWee ONE speakers turn their surroundings into musical instruments.

WOWee ONE speakers aim to address this shortfall by turning their surroundings into musical instruments. Set the company's iPhone-sized speaker on a desk, coffee table or even a surfboard and it transfers sound waves into that material -- creating an on-the-fly subwoofer.

Scott Friedman, CEO of SoulR Products, which makes the speakers, demonstrated the concept on Tuesday by playing a bass-guitar-heavy section of "House of the Rising Sun." It sounded tinny and small until he set the device down on a table. Then you could feel deeper vibrations. He proceeded to stick the gadget on all sorts of surfaces -- glass, metal, rock, an elevator wall -- like a doctor with a stethoscope. Each gave a different tone.

"A surf board's great" as a subwoofer, he said, "but a skateboard isn't so great because there are layers of wood with glue in the middle."

A special gel inside the speaker transfers the sound smoothly, he said.

WOWee speakers, which connect to any gadget with a headphone jack, sell for about $80 to $90. A thinner version of the product is coming out soon, Friedman said.