5 gadget trends to watch at CES 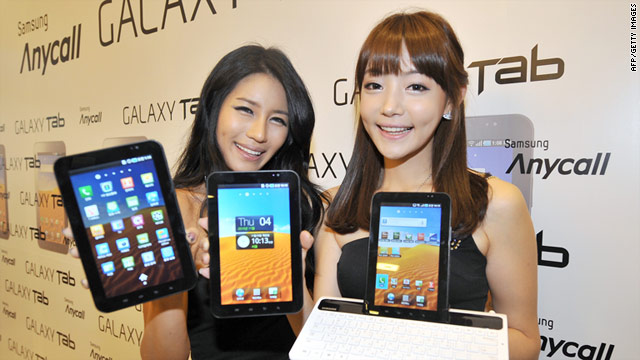 Samsung's Galaxy Tab, released in 2010, could find itself supplanted by a new breed of tablets at CES this week.
STORY HIGHLIGHTS

(CNN) -- For gearheads, the holiday celebrations don't end after Hanukkah, Christmas, Kwanzaa and New Year's. Many new tech toys are unwrapped not just in December but in early January, at a not-so-little event in Las Vegas, Nevada.

It's the annual Consumer Electronics Show, and it's a six-day gathering (including pre-show events and news conferences) where some 120,000 tech-industry types come to see gadget makers show off their newest wares.

CES usually brings a few surprises -- like Palm's much-hyped unveiling of the Pre phone two years ago, when the technology world thought it had its iPhone killer.

But thanks to corporate leaks, enterprising tech blogs and the hundreds of not-so-subtle e-mails flooding our inboxes, we have an educated idea of what to expect in Vegas this week.

Some of these gadget themes (the explosion of tablets) build on trends we saw at last year's CES. Others (connected appliances) appear to be emerging now. All may impact your gift-giving decisions next holiday season.

Here are five gadget trends we expect to see at this year's show.

Whispers that Apple was preparing to unveil a touch-screen tablet computer dominated much of the chatter inside the Las Vegas Convention Center during CES 2010.

Attendees wanted to see tablets, and they especially wanted to see what would become known as the iPad. But Apple, a notable CES holdout, unveiled its popular tablet on its own terms -- three weeks later in San Francisco.

Instead, people at last year's CES mostly got glimpses of tablet prototypes. In his CES keynote, Microsoft CEO Steve Ballmer previewed several tablet devices, none of which have hit the market.

That will change this year as hardware makers, eager to stake a claim in a hot new gadget category, are lining up to take on the iPad. As many as 80 tablets, some perhaps running a flavor of Windows, will be showcased at CES this week, said Gary Shapiro, head of the Consumer Electronics Association.

Motorola Mobility is expected to debut its long awaited Android 3.0 tablet through a tight-knit partnership with Google. Engadget reports that Toshiba will kick off CES with its new unnamed 10.1-inch Android tablet, and Vizio, the maker of flat-screen TVs, will jump into the tablet market.

Other contenders will emerge as well. CES 2011 could bring the dark horse that narrows Apple's early but wide tablet lead.

Cell phones have long peppered CES booths, but the increasingly high-tech communication devices may have a bigger presence than ever in 2011. That's because cellular providers, which generally skip CES, will be there in full force this week.

Verizon Wireless, the top U.S. carrier, is not likely to announce a network-ready iPhone at CES. But Verizon will host a keynote and subsequent press event at which it will likely unveil smartphones compatible with its new, faster 4G data network.

Among them may be HTC's Thunderbolt, a large touch-screen Android phone, photos of which have already leaked to the Web.

AT&T and T-Mobile USA also are each holding press events in Las Vegas just before the CES show floor opens.

And Vizio didn't wait for CES to unveil an Android smartphone Monday with a 4-inch touch screen, HD video camera and a front-facing camera for video chat.

Television in three dimensions, with eye-popping visuals and bulky glasses, was all the rage at last year's CES. Attendees and the media were intrigued, but consumers have yet to embrace the expensive technology.

While 3-D will be back again this year, along with some mobile versions and sets that don't require glasses, many observers feel the technology still has a ways to go before it catches on.

So in the meantime, get ready for a wave of so-called "smart" TV sets, with built-in operating systems and software for streaming content from the internet.

Between, Apple TV, Roku, Boxee, TiVo and other so-called "set-top" devices, the idea of being able to access Netflix, YouTube and Hulu on a flat-screen in your living room is gaining traction. Google says its TV software won't have a big presence at CES, but Intel and plenty of competitors will fill those holes.

Expect new internet-connected TVs from LG, Samsung and other manufacturers.

Beyond TVs, expect to see more unusual electronics getting outfitted with Wi-Fi or cell chips.

Cell carriers and appliance makers are pushing the idea of machine-to-machine -- that is, washing machines, refrigerators and energy readers that have the ability to access wireless data networks.

South Korean-based LG Electronics is promoting a line of home appliances that can send messages to your phone if, say, your refrigerator door is open.

Can a tweeting toaster be far behind?

Excluding a few weird, virtual-reality gizmos, video gaming is usually not a big focus of CES. Games have their time to shine in the summertime at E3, the year's big gaming show.

But gadgets are becoming a bigger part of mainstream console play, thanks to the recent excitement over gaming systems that react to players' motions instead of buttons on a controller. Microsoft and Sony are expected to showcase their Kinect and PlayStation Move, respectively at their massive CES booths.

Even Nintendo, which usually skips CES entirely, has reserved meeting rooms to privately demonstrate its hand-held 3DS device, which displays games in 3-D and is expected to hit U.S. stores in March. No glasses are needed, but let's hope the device doesn't mess with our eyes.