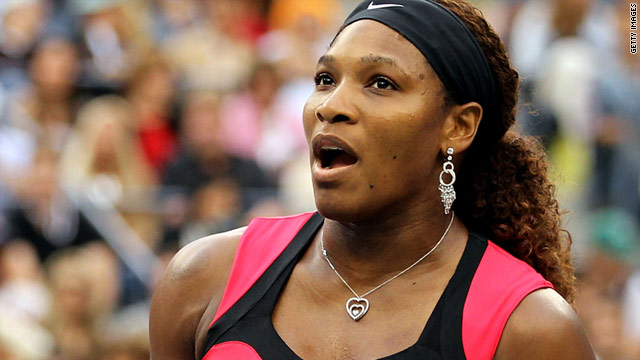 Serena Williams failed to add to her 13 major titles after being beaten beaten in the U.S. Open final by Samantha Stosur.
STORY HIGHLIGHTS

(CNN) -- Serena Williams could have been banned from her home U.S. Open after Sunday's final outburst, but the three-time champion has escaped with a $2,000 fine from the United States Tennis Association.

The American, on a two-year probation after a similar attack on a match official at the same tournament in 2009, verbally lashed out at umpire Eva Asderaki at the start of the second set of her defeat by Australia's Samantha Stosur on Sunday.

The 29-year-old was penalized for "intentional hindrance" after celebrating winning a point before it was over, and then remonstrated with the Greek official.

Tournament officials ruled that Williams' comments did not constitute a major offense.

Has Serena Williams been judged too harshly?

Ms. Williams' conduct, while verbally abusive, does not rise to the level of a major offense under the Grand Slam Code of Conduct
--U.S. Tennis Association

"After independently reviewing the incident which served as the basis for the code violation, and taking into account the level of fine imposed by the U.S. Open referee, the Grand Slam Committee Director has determined that Ms. Williams' conduct, while verbally abusive, does not rise to the level of a major offense under the Grand Slam Code of Conduct."

Williams earned $900,000 for her runner-up finish in New York, with the final taking place on the 10th anniversary of the September 11 terror attacks in the city which left almost 3,000 people dead.

She refused to apologize for her outburst in the post-match press conference, but applauded Stosur on winning her first major title.

Williams was fined $82,500 for her foul-mouthed tirade in the 2009 semifinal defeat by Kim Clijsters, whose bid for a fourth title at Flushing Meadow this year was ended by a pre-tournament stomach injury.