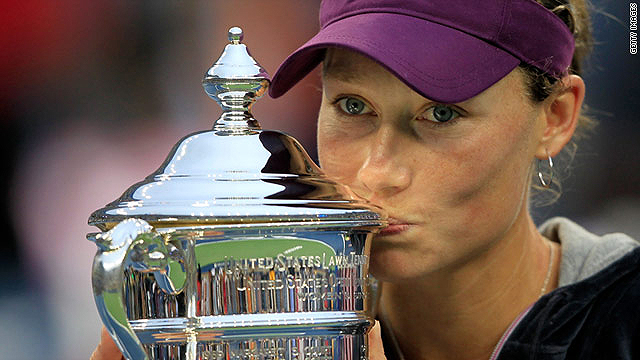 But the Down Under drought has been broken, after Samantha Stosur produced one of the biggest shocks in U.S. Open final history by beating Serena Williams 6-2 6-3 at Flushing Meadows in 73 minutes.

Stosur's best previous effort was last year when she made the women's French Open final. But despite entering that match as a favorite, the 27-year-old was beaten by Italian Francesca Schiavone.

According to Tennis Australia and her official website, Stosur was born in Brisbane, Queensland, in 1984, and started playing tennis at the age of eight.

The right-handed player went on her first tour to Indonesia aged 13, and joined the Australian Institute of Sport at 16.

She turned pro in 1999 and first cemented her tennis prowess as a doubles player, reaching the No. 1 ranking in doubles in February 2006, having claimed a series of titles with Lisa Raymond. The Australian-American duo won the U.S. Open in 2005 and the French Open in 2006.

But in 2007 Stosur's health declined -- she was diagnosed with Lyme disease, and also contracted viral meningitis. Consequently it wasn't until 2009 that she was again in top form and able to claim her maiden WTA title in Osaka in 2009.

By 2010 Stosur had decided to concentrate on singles and added a second WTA singles title in Charleston before culminating that year with her finals appearance at Roland Garros.

Coached by David Taylor, she's ranked tenth by the WTA, and currently resides in Tampa, Florida.