Sharapova fights back to clinch glory in Cincinnati 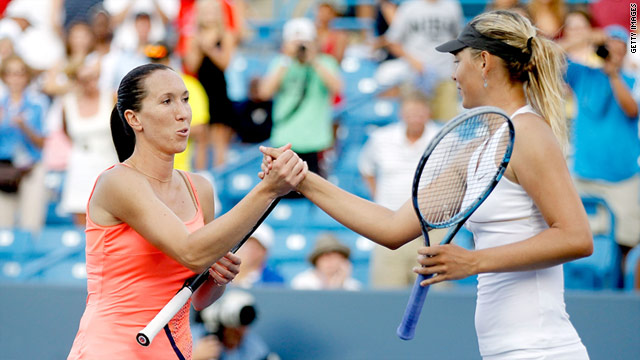 Maria Sharapova has now won two WTA Tour titles in 2011 and is ranked four in the world.
STORY HIGHLIGHTS

(CNN) -- Maria Sharapova fought back from one set and a break down against Jelena Jankovic to clinch the Western and Southern Open in Cincinnati.

Sharapova, a beaten finalist at the tournament in 2010, battled to secure a 4-6 7-6 (7-3) 6-3 win in a marathon encounter which lasted two hours and 49 minutes at the Lindner Family Tennis Center.

Serbia's Jankovic broke fourth-seed Sharapova on three occasions in the deciding set but then doubled faulted twice in a row to hand the Russian a 5-3 lead. Sharapova took the final game to clinch the match and her 24th career victory.

"It was a really tough one out there," Sharapova, who has won two Tour events in 2011 and is now ranked four in the world, told the WTA's official web site. "It was so physical, which is something to expect when you're playing Jelena.

I was so close last year, so it's nice to have that feeling of being the champion
--Maria Sharapova
RELATED TOPICS

"We kept breaking each other. It felt like one of us played a few good points then the other one, and the levels were up and down throughout the match. I'm just fortunate that at the end of the day, I'm the winner."

"I was so close last year, so it's nice to have that feeling of being the champion," the 24-year-old said.

"It wasn't really something I thought about coming in this week. I just knew I played some good tennis here last year, and I hoped I could take it a step further."

"I had my chances and it could have gone either way, but in the end she was the better player," former world number one Jankovic said.

"I think my biggest mistake was I didn't serve well today. I'd break her many times and would serve to go two games ahead, but it didn't happen. It shows the match isn't over until you shake hands."