Djokovic on course in Cincinnati 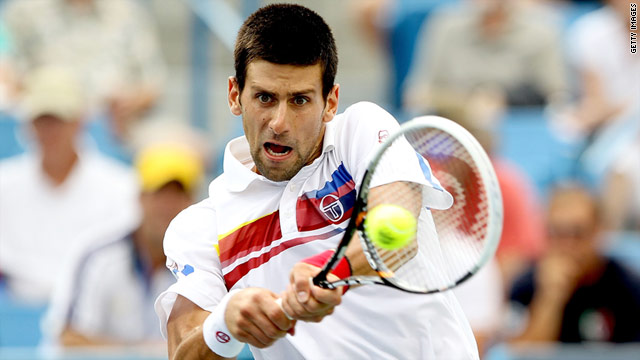 World number one Novak Djokovic has lost only one match in 2011, to Roger Federer at the French Open.
STORY HIGHLIGHTS

(CNN) -- World number one Novak Djokovic is into the quarterfinals of the Western and Southern Open after beating the Czech Republic's Radek Stepanek 6-3 6-3 in Cincinnati.

Djokovic, 24, had his serve broken on three occasions by Stepanek, ranked 29 in the world, but recovered to seal victory with his first match point at the Lindner Family Tennis Center.

"There are periods of the match where I serve okay and then periods where I serve very bad, but that's okay," the Serb, who has now won 55 matches this season, told the ATP Tour's web site.

"It all happens. I played so many matches, and they caught up to me a little bit. It's expected that some part of my game is not working 100 per cent."

I played so many matches, and they caught up to me a little bit
--Novak Djokovic
RELATED TOPICS

The three-time grand slam winner will face French number one Gael Monfils in the last eight, after the 24-year-old defeated Germany's Philipp Kohlschreiber 6-2 6-2.

Rafael Nadal, the man Djokovic replaced as world number one, emerged victorious from a marathon encounter with his compatriot Fernando Verdasco.

"You enjoy always a good match," reflected Verdasco, who forced Nadal to five match points. "But when you lose in this way, of course it's not easy, because it could have been a big win."

American number one Mardy Fish will be Nadal's opponent in the next round; after the seventh seed registered a 7-5 7-5 win over French 12th seed Richard Gasquet.

Roger Federer, who beat Fish in last year's final, continued his quest for a record fifth Western and Southern Open crown with a 6-4 6-1 triumph over wildcard James Blake.

"Against James it's always a fast paced match from start to finish," 16-time major champion Federer said. "You hope you get on a roll and he doesn't.

"I was able to counter his attacking style. I was able to play clean on my service games. In the second set he didn't play so well, and the score line shows that."

British number one Andy Murray is safely through courtesy of a straight-sets 6-2 7-5 victory over American qualifier Alex Bogomolov Junior.

Murray, beaten by Djokovic in January's Australian Open final, will play 10th seed Gilles Simon for a place in the semifinals.