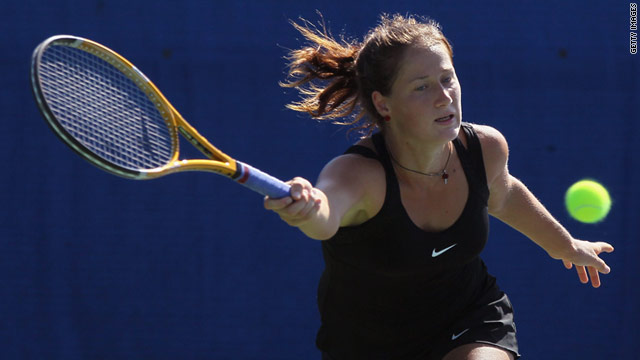 Bojana Jovanovski nearly missed her opening round match in the Mercury Insurance Open after going to the wrong place.
STORY HIGHLIGHTS
RELATED TOPICS

She was supposed to be facing Roberta Vinci at a tennis tournament in Carlsbad, California but Bojana Jovanovski instead landed 1,500km short -- in Carlsbad, New Mexico.

The Serbian player had mistakenly flown to the wrong town after a travel mix-up and only arrived at the correct destination half an hour before her first round match after an early morning flight.

Things went from bad to worse when she finally made it on court at the Mercury Insurance Open as she lost 3-6 6-4 6-1 to her Italian opponent.

The 19-year-old took part in a tournament in Maryland the week before and then flew from Washington to Dallas and then via Albuquerque to the wrong Carlsbad.

After arriving at a near-empty airport Jovanovski called tournament organizers who said they had officials looking for her in the arrivals hall at the Californian destination.

"They said they were at the airport and looking for me," she was quoted as saying by AFP. "I said I was the only person here."

After the mix-up was discovered, Jovanovski spent the night in the New Mexico town before her early morning scramble to the right Carlsbad the following day.