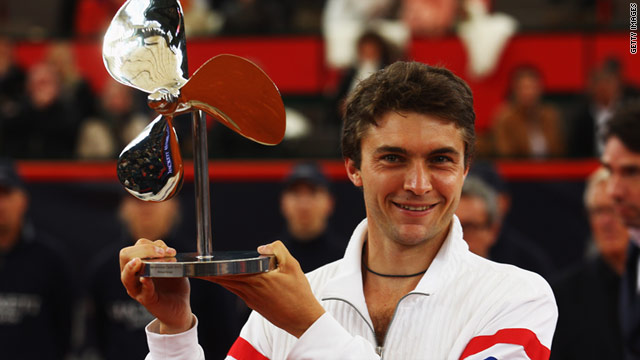 Gilles Simon's victory at the German Tennis Championships was the ninth of his career.
STORY HIGHLIGHTS
RELATED TOPICS

(CNN) -- Gilles Simon secured his second title of the 2011 season by defeating Nicolas Almagro to lift the German Tennis Championships in Hamburg.

The Frenchman beat his Spanish opponent 6-4 4-6 6-4 in two hours and 38 minutes to claim his ninth career triumph.

Simon's victory was his first on clay since the BRD Nastase Tiriac Trophy in 2008 and will see him move up to 11 in the world rankings.

Under the roof at the Rothenbaum Tennis Center, Simon, the number five seed, needed just one break of serve to take the opening set, after his opponent had squandered eight break points.

Almagro edged the second set but an early break in the decider set Simon on course for his first title since winning the Medibank International in Australia back in January.

"I feel very, very good. I had to win so many tough matches this week," Simon told the ATP World Tour's official web site.

"Today, the final was really hard to win. I had to play my best tennis to win and I'm proud to win this tournament."

"I knew before he could hit very hard, but also, he didn't miss anything, so I really had to fight hard on every point. We played almost three hours and it was a really, really hard match."

"I think the first game of the third set, I didn't play my best tennis. That game, I made three mistakes in the important moments," admitted Almagro.