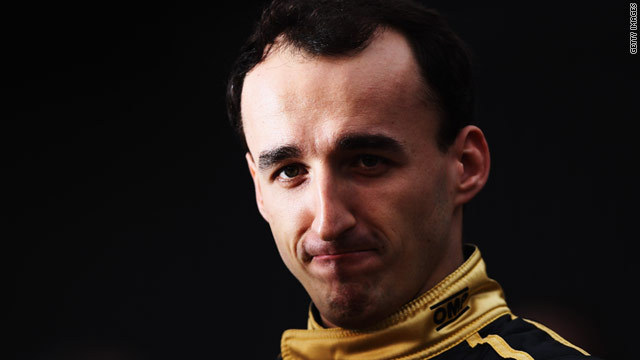 Formula One driver Robert Kubica has been in intensive care since his crash on February 6.
STORY HIGHLIGHTS

(CNN) -- Renault say Robert Kubica's condition is "positive" as the Formula One driver prepares to undergo yet more surgery in his recovery from a rally driving accident.

Kubica suffered multiple fractures and partially severed his right hand after a crash in Italy on February 6 and has been in intensive care ever since.

The 26-year-old has already had lengthy operations to save the functionality of his hand and to rebuild his foot, shoulder and the inner part of his elbow.

But he has one more bout of surgery on his elbow to complete on Wednesday.

A statement on Renault's website read: "The latest update on Robert is that his condition remains positive.

"He will stay in intensive care for the next couple of days to allow a complete check-up and to avoid another change of department before his final operation.

"His good general condition means that the final surgery (on the elbow) is scheduled for Wednesday."

Kubica's Skoda car slammed into a church wall as he was taking part in a rally in Italy. It took paramedics over an hour to cut him from the wreckage.

He is expected to miss the entire Formula One season though he was quoted as telling Italian newspaper Gazzetta dello Sport on Friday that he would be back before the year is out.

He said: "The fingers work, I can feel them. My arm too. But they still need to operate on me and only after that will we know.

"I don't have much pain but I'm sedated. After the last operation, the countdown to my return to the track will begin."

Renault are considering replacing Kubica with Nick Heidfeld, who impressed during testing for the new season in Jerez, Spain.

The German, who raced for BMW Sauber last season, was quicker than Ferrari's Fernando Alonso and Michael Schumacher in the Mercedes GP during Saturday's session.

The Formula One season begins in Bahrain on March 13.