AC Milan fight back to draw with Lazio 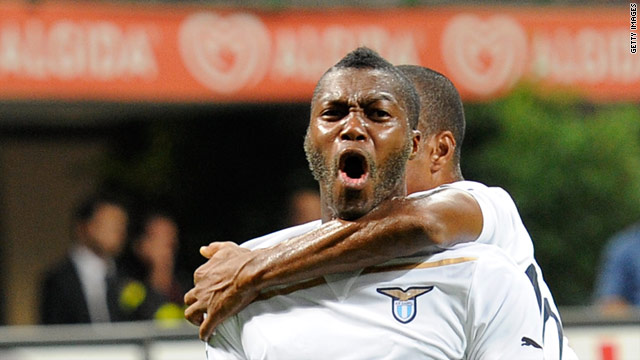 (CNN) -- Champions AC Milan fought back from going two goals down to draw 2-2 at home to Lazio, as the Italian Serie A season finally got underway on Friday after a two-week delay because of a players' strike.

The San Siro crowd were treated to a thriller, with Lazio setting the ball rolling by taking a 12th-minute advantage through new signing Miroslav Klose.

Lazio played well, they covered the pitch well and we conceded chances on the counter
--Massimiliano Allegri
RELATED TOPICS

But Milan responded superbly and pulled a goal back in the 29th-minute when Antonio Cassano teed up Zlatan Ibrahimovic for a simple tap-in.

And the hosts were level just four minutes later when Cassano himself was on hand to head home a corner from close range.

Both sides had chances to win the match in the second half, but Milan went closest to nicking the three points when his shot struck the post just after the hour mark.

"We struggled at first, Lazio played well, they covered the pitch well and we conceded chances on the counter," Milan coach Massimilano Allegri told reporters.

"Then for 60-65 minutes we did what we should've done, especially in the second half when we missed several chances to win."

Meanwhile, in Germany, midfielder Sidney Sam scored twice as Bayer Leverkusen won 4-1 at promoted Augsburg to go top of the German Bundesliga table ahead of this weekend's matches.

Leverkusen are on 11 points from their five matches, point ahead of Bayern Munich, Schalke and Werder Bremen, who all play later on this weekend.