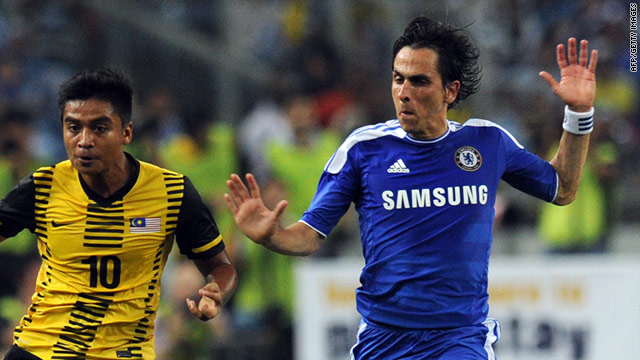 The Premier League side said constant jeers directed at the 31-year-old midfielder during a pre-season match against a Malaysian XI were anti-Semitic.

Malaysia, a mainly Muslim country, does not recognize the state of Israel. The Malaysian FA has yet to respond to the allegations.

"Such behavior is offensive, totally unacceptable and has no place in football," said a statement on Chelsea's website.

Having taken time to consider the issue fully, it has become apparent that a formal complaint was necessary
--Chelsea statement
RELATED TOPICS

"The club did not make representations at the time as it was initially unclear as to the nature of the abuse Yossi received, as several players from both teams experienced similar treatment, sometimes louder and longer.

"However, having taken time to consider the issue fully, it has become apparent that a formal complaint was necessary.

"Our stay in Malaysia was, on the whole, a very positive experience for all the team traveling on the pre-season tour. It is a shame, therefore, that the behavior of a minority of supporters is also a memory we take away."

The match in Kuala Lumpur on July 21 was watched by almost 85,000 spectators, with Chelsea winning 1-0 thanks to a second-half own-goal from the home team.

The 2010-11 Premier League runners-up will conclude the pre-season tour against English rivals Aston Villa in Hong Kong's Asia Trophy on July 30, before another friendly away to Scottish champions Rangers on August 6.

New manager Andre Villas-Boas will face his first competitive match in charge when the domestic campaign begins with a trip to Stoke on August 14.