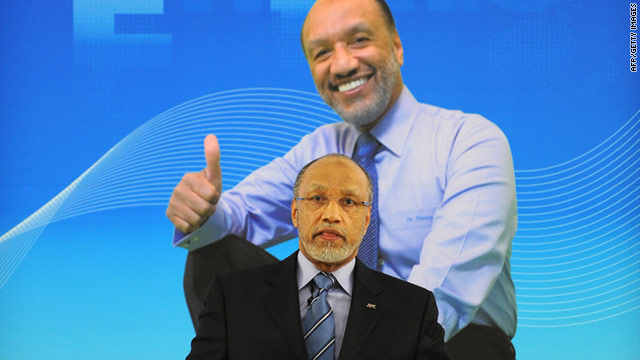 (CNN) -- FIFA, football's governing body, has announced it is to investigate two of its most high profile members over bribery allegations, just a week before one is due to stand against Sepp Blatter in upcoming presidential elections.

Jack Warner, who runs the CONCACAF federation covering Central and North America, and Mohamed Bin Hammam, head of the Asian Football Confederation and Blatter's only opponent in FIFA's presidential election due to be held June 1, have both been named in a report by fellow FIFA Executive Committee member Chuck Blazer.

The report contains allegations of bribery against Warner and Bin Hammam following a meeting the two held with the Caribbean Football Union (CFU) on May 10 and 11 this year.

"In view of the facts alleged in this report, which include bribery allegations, FIFA Secretary General Jerome Valcke, in compliance with art. 16 of the FIFA Code of Ethics, yesterday requested the FIFA Ethics Committee to open ethics proceedings," FIFA said in a statement.

Both men have been asked to attend a meeting in Zurich on Sunday to discuss the allegations, just three days before the presidential vote.

The 208 associations will chose between the incumbent Sepp Blatter, who has been in the post for 13 years, or Bin Hammam, a Qatari seen as instrumental in his homeland winning the bid to host the 2022 World Cup.

Bin Hammam, who has vowed to reform FIFA and fight corruption if elected president, "completely denied" any wrongdoing in a statement released to the AFP news agency, Wednesday.

"This has been a difficult and painful day for me today. But, if there is even the slightest justice in the world, these allegations will vanish in the wind," Bin Hammam said, AFP reported.

"This move is little more than a tactic being used by those who have no confidence in their own ability to emerge successfully from the FIFA Presidential election," he added, AFP reported.

Warner is seen as a key power broker in FIFA's presidential elections, with CONCACAF carrying 35 of FIFA's 208 votes.

Earlier this month, former chairman of England's failed 2018 World Cup bid David Triesman told a British parliamentary committee that Warner and three other members of FIFA's executive committee had demanded cash and honors in return for their votes.