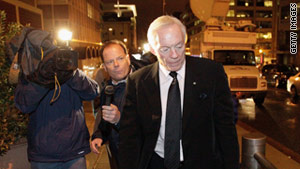 Washington (CNN) -- Talks aimed at averting a work stoppage in the National Football League broke down Friday, with the players' union declaring it is decertifying itself in a move expected to launch a lengthy legal battle with owners.

"The union left a very good deal on the the table," the NFL said in a statement released Friday. "At a time when thousands of employees are fighting for their collective bargaining rights," the statement continued, " this union has chosen to abandon collective bargaining in favoer of a sham 'decertification' and antitrust litigation."

Failure to reach a new collective bargaining agreement means the players will probably sue the NFL owners to prevent being locked out, the first step in what could a protracted courtroom confrontation that would delay the start of the 2011 season scheduled for September 8.

"It makes it more complicated, but we shouldn't be discouraged," said Jerry Richardson, owner of the Carolina Panthers.

"In due course we'll have an agreement," Richardson said.

The parties had already extended the deadline for the talks twice, the most recent a seven-day extension that was scheduled to end at 11:59 p.m. Friday.

Shortly after 5 p.m., the NFL Players Association issued a statement announcing its decertification. Federal mediator George Cohen told reporters shortly afterward that he recommended an end to the talks he was overseeing because of the lack of prospects for a deal.

Commissioner Roger Goodell and a few NFL owners then told reporters it was the players who walked away from the talks.

"Their position has basically been, 'take or leave it,' " Mara said, adding that it became "painfully obvious" the players wanted to take the matter to court.

"I never really got the feeling during the past two weeks that they were serious about negotiating," Mara said.

By decertifying, the union cleared the way for the players to file an antitrust lawsuit if the owners lock out the players.

All of that means the likelihood of the first NFL work stoppage since 1987, with months of labor and legal maneuvering for football fans already confused about how a $9 billion industry lacks enough money to satisfy everyone.

Even if there is a lockout, the NFL draft would proceed as scheduled on April 28-30, the league says. All other regular off-season activity would cease, threatening to delay or cancel the start of the new season.

When asked if there will be football in September, Dallas Cowboys owner Jerry Jones said, "The answer is, we'll get it done, and getting done means we won't miss any football."

Asked about the talks last week, President Barack Obama said that the parties ought to be able to figure out how to split the revenue and keep fans happy.

"You've got owners, most of whom are worth close to a billion dollars, you've got players who are making millions of dollars," he said on March 3.

"My working assumption, at a time when people are having to cut back, compromise and worry about making the mortgage and paying for their kids' college education, is that the two parties should be able to work it out without the president of the United States intervening."

Other issues include a proposal by the owners to increase the regular season schedule to 18 games from the current 16. The overall number of games per season, including exhibition games, would remain at the current 20.

The players' union questions why the owners should get additional money up front and challenges the league's 32 teams to fully open their financial records. The owners, who say they are not legally obligated to provide full financial disclosure, argue they are looking out for the long-term stability of the franchises and the league.

If there is a lockout, players won't get their salaries or bonuses, and if the shutdown forces the league to cancel games next season, the NFL estimates a loss of $400 million in revenue each week.