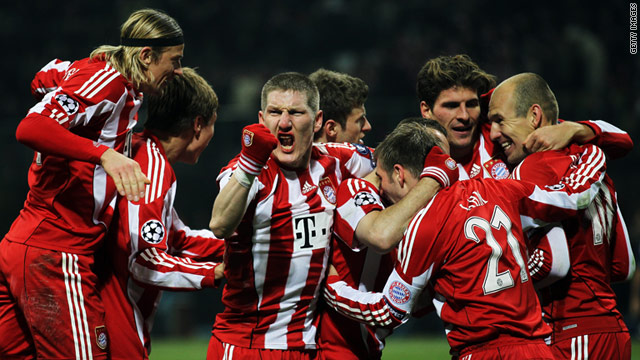 Bayern had the better in the repeat of last year's final and hit the woodwork in either half before Gomez pounced after Arjen Robben's shot had only been pushed out by Julio Cesar.

The other tie Wednesday was goalless as Manchester United held Marseille in the Stade Velodrome in a disappointing game with only four shots on target.

The game's best chance saw Darren Fletcher draw a good save from Marseille goalkeeper Steve Mandanda in the first half.

Marseille improved after the break, but United's defense, with Chris Smalling outstanding, held out comfortably.

United manager Alex Ferguson would have preferred his team to have taken a lead for the second leg but was still confident.

"This sort of result can be dangerous if you concede a goal at home," he told ITV Sport.

"But its simple because if we win we go through."

Inter, who are moving up the Serie A standings under new coach Leonardo, might have taken the lead early against the German champions.

Their young central defender Andrea Ranocchia was given the chance from Wesley Sneijder's free-kick.

But Bayern responded and Robben crossed for French international Franck Ribery to hit the crossbar with his header.

Samuel Eto'o drew a fine save from Thomas Kraft in the visiting goal before the break, but after the interval it was Bayern who threatened again as Robben exchanged passes with Gomez and saw his shot hit the outside of the post.

Inter's best opportunity came after an Eto'o effort was saved by Kraft before Esteban Cambiasso shot over from the follow-up.

Kraft also did well to push away a drive from Inter substitute Houssine Kharja until Gomez made it seven Champions League goals in seven games at the death.

"That was certainly my most important goal in the Champions League," he told AFP.

The result means all three Italian teams left in the Champions League, Inter, AC Milan and AS Roma all lost their first leg matches at home.