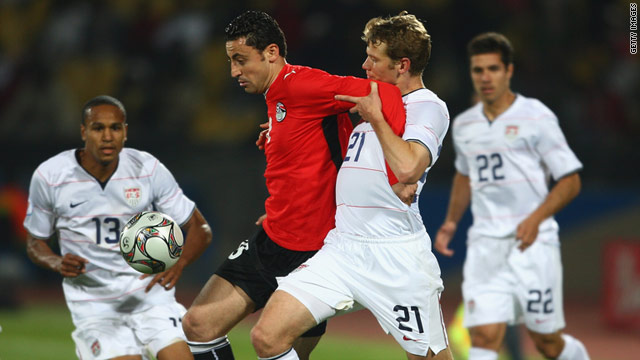 The U.S. beat Egypt 3-0 at the 2009 Confederations Cup in South Africa before losing to Brazil in the final.
STORY HIGHLIGHTS
RELATED TOPICS

(CNN) -- The United States' national soccer team has pulled out of a planned friendly match in Cairo next month due to the political instability in Egypt.

Coach Bob Bradley's side was scheduled to play the six-time African champions on February 9, but will now be without a fixture on that date.

"We were excited about the opportunity to play against Egypt, but due to the current situation all parties agreed it was best to cancel the match," U.S. Soccer president Sunil Gulati told his federation's website on Monday.

"We appreciate the efforts of the Egyptian Football Association and the U.S. State Department as we worked through this situation."

The U.S. began 2011 with a 1-1 draw against Chile this month, and will again face South American opposition in March.

The matches are in preparation for the CONCACAF Gold Cup to be held in the U.S. in June, which features 12 nations from North America, Central America and the Caribbean.

Anti-government protesters have been demonstrating for the past week against Egypt's President Hosni Mubarak, who has ruled for three decades.

The U.S. has sent a team of heavily-armed Marine Corps security personnel the American Embassy in Cairo to provide additional security for the facility.