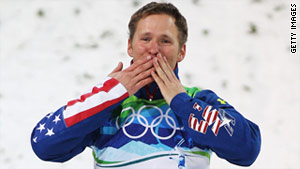 Peterson told police he was going to take his life and said he was in Lambs Canyon, between Salt Lake City and Park City, Hoyal told CNN. Officers found him deceased there at about 11:30 p.m., he said.

Peterson told an CNN iReporter in Vancouver, Canada, the cheers he received when receiving the silver medal in men's aerials "was one of the coolest feelings in the world." He had competed in two previous Winter Games.

According to a biography on the United States Ski and Snowboard Association website, Peterson picked up the nickname "Speedy" at a summer ski camp in Lake Placid, New York, in the mid-1990s because coaches thought he resembled the cartoon character "Speed Racer" with a big helmet.

His signature jump was called the "Hurricane," which he failed to land in Torino, Italy, during the 2006 Winter Games, dropping him from third to seventh. The next day, Peterson was sent home after a post-party fight, according to the biography.

"I know Speedy's friends and family were incredibly proud of his effort in Vancouver, and his achievements were an inspiration to people all over the world," said committee chief executive Scott Blackmun. "The personal challenges Speedy has battled are familiar to all of us, and on behalf of the U.S. Olympic Committee, I'd like to offer my sympathy to Speedy's family and friends. Today is a sad day."