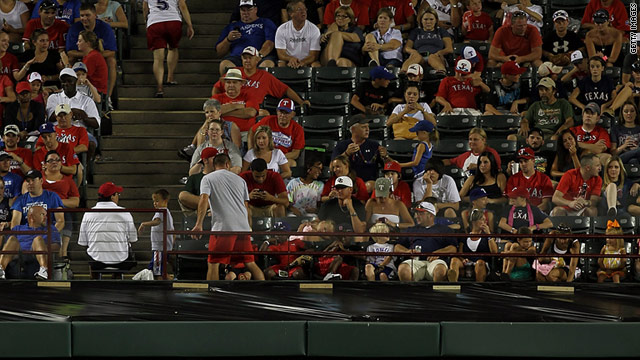 The Rangers say that even though current heights exceed code, the ballpark is raising the height of rails in front of seating areas.
STORY HIGHLIGHTS
RELATED TOPICS

(CNN) -- The Texas Rangers will raise the height of the rails at Rangers Ballpark in Arlington, the team said Tuesday, after a 39-year-old fan fell to his death while trying to catch a ball.

"Even though all current rail heights in Rangers Ballpark in Arlington currently exceed code, the Rangers intend to raise the height of all rails in front of seating areas to the highest standard in the United States at this time," the team said in a statement.

As the rails are being refitted, the Rangers said they would take "interim" steps, such as posting new signs that will remind fans not to lean, sit on or stand against the rails. The team will also issue a warning prior to the start of each game via its public address system, the Rangers said.

The news comes in the wake of the death of Shannon Stone, a veteran firefighter and Rangers fan whose death prompted a national outpouring of condolences.

In the second inning of the ill-fated game on July 7, star outfielder Josh Hamilton tossed a souvenir ball into the stands after a batter hit a foul ball. Stone stuck out his glove and reached for the ball, but lost his balance and flipped over the railing of the outfield seats. He fell about 20 feet and crashed head-first into an area near a scoreboard, suffering fatal injuries.

Stone is survived by his wife, Jenny, and his young son, Cooper, who witnessed the tragic accident.

Another man fell at the stadium last year but survived. On July 6, 2010, a fan fell while trying to catch a foul ball. The man, Tyler Morris, survived the 30-foot drop but fractured his skull and injured his foot and ankle.

"The safety of our fans is our top priority," Rangers CEO and President Nolan Ryan said in the statement. "The initiatives we are announcing today for Rangers Ballpark in Arlington will help to ensure that we meet that priority."