For more on this story, see CNN affiliate WFAA

(CNN) -- For a youngster, a trip to the ballpark may yield a belly full of Cracker Jacks and memories he or she can pass on to the next generation.

For a lucky few each night, it means taking home a real baseball touched by a major league player.

Thursday night in Arlington, Texas, Rangers star outfielder Josh Hamilton played his part in a custom almost as old as the game itself. He tossed a souvenir ball into the stands after a batter hit a foul ball.

Shannon Stone, 39, who came to Rangers Ballpark with his 6-year-old son, stuck out his glove and reached for the ball, only to fall about 20 feet and suffer fatal injuries. He died of blunt-force trauma, according to the Tarrant County medical examiner.

The second-inning incident left the Rangers club and its athletes shaken.

Friday, Rangers president Nolan Ryan, a Hall of Fame pitcher, said he saw no reason to discontinue the tradition. 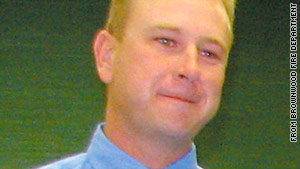 Shannon Stone, 39, was a firefighter in Brownwood, Texas.

"I know as a former player, that when you're on the field and you have an opportunity and you have a child asking for a baseball, you like to accommodate them," Ryan told reporters. "This just happens to be a situation that turned into a great tragedy. And what you'd like to do is hope that we don't have that situation come up again. But I also would not suggest that we don't give baseballs away."

The Rangers held a moment of silence before Friday night's game against the Oakland A's. Members of both teams wore black ribbons and flags flew at half-mast.

A counselor was available for players, Ryan said.

Hamilton, who was in the lineup, said he will call the Stone family. He talked Friday with the Fort Worth Star-Telegram about the ordeal.

"It was just hard for me, hearing the little boy screaming for his daddy after he had fallen, and then being home with my kids, (it) really hit home last night," the outfielder said.

"It's a very, very sad day for the Texas Rangers organization," Ryan said. "It hits us at our roots of who we are. We're about making memories, about family entertainment."

Stone flipped over the railing of the outfield seats. He crashed head-first into an area near a scoreboard as his horrified son watched.

The Brownwood, Texas, firefighter was rushed to a hospital where he died, the Arlington Fire Department said.

Ryan, on behalf of Stone's widow, asked the media to refrain from using the footage of Stone's fall, saying it was the "decent thing to do."

Ryan commended the emergency response after the incident and said the club's top concern is fan safety.

The height of the railings has never been increased because the club was told they exceeded the city's code limits, said Ryan. Still, he said, the fact that an incident like this has happened in the past two years is "disturbing."

Ryan said the club will review the rail height. Workers Friday installed a safety tarp over the gap in which Stone fell.

Stone's accident is the fourth at Arlington in its history, according to Ryan.

Another fan who was sitting near Stone saw him leaning over the rail. The second man tried to grab Stone's shirt, but could not hold on.

Video footage shows Stone's son -- decked in a Rangers hat and T-shirt -- reaching toward his father as he tumbles over the railing.

One fan who saw the fall described the incident to CNN affiliate WFAA.

"Just as the ball hit his hands, it kind of threw him off balance and he went head-first," he said. "It looked awful because you knew there was no way he was going to land on his feet."

Margie Hargis, who was nearby, told ESPN that after the fall, Stone called up, asking people to check on his son. "I keep having flashbacks," she said of the fall. Ronnie Hargis said he tried to grab Stone before he fell.

"We're very heavy-hearted about this," said Ryan. "Our thoughts and prayers go out to the family."

Major League Baseball issued a statement saying officials were "shocked and saddened" over Stone's death and are reviewing the incident.

On July 6, 2010, a fan fell from the second deck of the ballpark while trying to catch a foul ball. The man, Tyler Morris, survived the 30-foot fall but fractured his skull and injured his foot and ankle.

"Somebody had to have been watching over me from above," Morris later told reporters.

Stone was a 17-year veteran of the Brownwood Fire Department. The city plans to fly flags at half-staff the day of his funeral, which is still being planned.