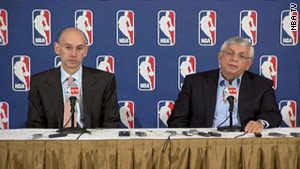 (CNN) -- The NBA said Thursday it will recommend a lockout after the professional basketball league and players failed to reach a new collective bargaining agreement.

Deputy Commissioner Adam Silver said owners could not agree to the players union call for an average $7 million player salary in the sixth year of a deal. The current salary average is about $5 million.

While both sides described the negotiations as cordial, they agreed the gulf between them was too great to bridge by midnight Thursday, when the current agreement expires.

A lockout, which must be voted on by the league's labor relations committee, could jeopardize portions of the the 2011-2012 season.

"I'm not scared, but resigned to potential damage this could cause to our league," NBA Commissioner David Stern said.

"Now let's get down to business," said players union chief Billy Hunter. "We are trying to arrive at a win-win for both sides."

Stern told reporters the season was not profitable for most of the league's 30 owners and that they needed some cost-cutting help from players. Stern said the league lost as much as $300 million in the 2010-11 season, according to the NBA's website.

Hunter contended there are other ways for clubs to save money.

The last work stoppage occurred in 1998.

Negotiations are expected to resume over the next two weeks.