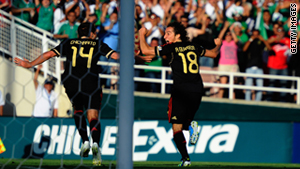 Andres Guardado, #18 of Mexico, celebrates his goal against the United States with Javier Hernandez, #14.

Los Angeles (CNN) -- In one of soccer's biggest showdowns, Mexico rallied from an early deficit with four straight goals to defeat the United States 4-2 and win the 2011 Gold Cup on Saturday.

The American team jumped out to an earlier lead when Michael Bradley, a center midfielder and the son of coach Bob Bradley, scored the first goal just nine minutes into the game. Landon Donovan, the leading goal-scorer in U.S. history, netted a second goal roughly 20 minutes later.

But Mexico answered back, with Pablo Barrera and then Andres Guardado scoring two goals within 10 minutes of each other to tie the score.

A few minutes into the second half, Barrera scored another goal to give Mexico its first lead of the game. Giovani dos Santos gave Mexico a 4-2 advantage with a score with about 13 minutes remaining, effectively cinching his team's victory.

Fox Soccer reported that 93,420 spectators watched the game at the Rose Bowl in Pasadena, California, above its capacity of 92,542 according to the stadium's website.

Mexico's win gives in bragging rights in the rivalry, the third consecutive time both teams have met in the tournament's final.

As it is every year, the game was organized by the soccer confederation for North America, Central America and the Caribbean.

Besides boasting privileges, Mexico earns a ticket to the Confederations Cup in Brazil in 2013, a year before the World Cup.

Mexico and the United States had split the last two Gold Cups, with the Mexicans embarrassing the Americans with a 5-0 thrashing in 2009.

In 2007, the Americans took the contest, sending the team to the 2009 Confederations Cup where it finished second behind Brazil.

Until Saturday night, the United States had not lost to Mexico on American soil when at full strength in 12 matches dating back to the year 2000.

Still, the American players know that soccer draws many fans to Mexico's team, as was evident at this weekend's game. Hispanics are now the nation's second-largest group under the latest census.

"You come into your country and you know they are going to have more fans than you are," U.S. defender Jonathan Bornstein said in remarks on the confederation website, "but nonetheless, we're going to have enough fans out there supporting us. We're on our home turf, and so we need to be considered the home team even though we might not have all the fans."

Added U.S. goalkeeper Tim Howard about the rivalry: "It's been the same since I was a kid watching it. It's the same today. It's passion. There's a ton of respect, but yet again it borders on hatred."

Mexico's team manager Jose Manuel de la Torre said before the contest that the game "has transformed into something very important to the Mexican people that live in the United States."

"It is a clasico," de la Torre told the confederation, before Saturday's match. "That makes for a heated atmosphere. But the final is still a soccer game featuring two strong, well-coached teams that have worked hard to reach a final we will enjoy."

For the United States, it marks its fourth consecutive appearance in the final -- a confederation record, according to the U.S. Soccer Federation. The Gold Cup is being held in Southern California for the first time in nine years, the federation said.