Expert: Use gay slurs controversy to tackle homophobia in sports 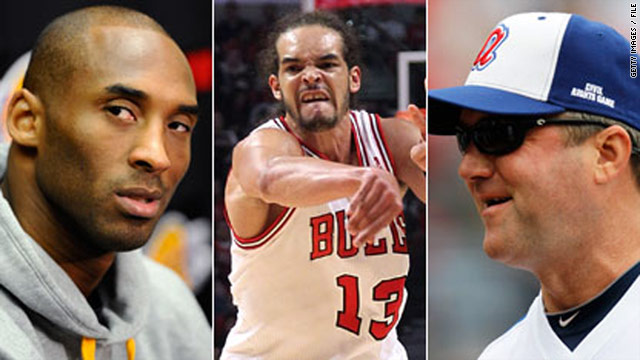 (CNN) -- Gay slurs hurled by three figures in professional sports in the last month are more than just testosterone-fueled temper tantrums, some say.

The behavior, they say, is symptomatic of a deeper problem and should be used as an opportunity to tackle homophobia in professional sports.

"Kobe Bryant, Joakim Noah and Roger McDowell are not any different from many people in our society who use offensive language like that on a daily basis," said Jarrod Chin of the Society for the Study of Sport in Society at Boston's Northeastern University. "These incidents provide a real opportunity for the NBA and MLB to take a strong stance against homophobia."

In April, a frustrated Los Angeles Lakers star Kobe Bryant laced a referee with an epithet that gays find offensive.

Bryant quickly apologized and was fined $100,000. Bryant was apparently angry that the referee penalized him for a technical foul.

In early May, Atlanta Braves pitching coach Roger McDowell made national headlines for tossing anti-gay slurs at a group of fans in San Francisco. He also made crude gestures at the fans, in full view of children who were in the crowd.

After a short suspension, an emotional McDowell apologized at a news conference.

And last week, bombastic Chicago Bulls center Joakim Noah was captured by television cameras lobbing a similar slur at a fan after his second foul in the game. Noah apologized right after the game and was slapped with a $50,000 fine.

"When sports stars use slurs, it is especially damaging because their increased public profile means many more people are exposed. These people seem to have lost sight of the fact that in their prime, in pivotal moments in games, they are one of the most influential people in the world," said former NBA player John Amaechi.

Amaechi knows all too well about homophobia in sports. He is credited as being one of the few professional stars to admit he is gay.

But Amaechi came out of the closet after he retired. He said he did not feel comfortable disclosing his orientation during his 5-year NBA stint.

"First of all, I wouldn't want him on my team," Hardaway told a radio host in 2007. "You know, I hate gay people, so I let it be known. I don't like gay people and I don't like to be around gay people. I am homophobic. I don't like it. It shouldn't be in the world or in the United States."

Hardaway later apologized for his statement -- but the sentiment persists among many athletes, Amaechi says.

"Sports stars need to remember that being a positive role model is as much a part of their job as making lay-ups, hitting home runs or scoring touchdowns," he said.

Rick Welts, president and CEO of the Phoenix Suns, says he had kept his sexual orientation secret throughout his long career.

Welts came out when the Kobe Bryant epithet caused a stir. He said Bryant's slur solidified in his mind that he needed to go public.

"Well, the irony of the timing is it was the day before that I had been sitting in David Stern, the (NBA) commissioner's office, to kind of discuss this with him. And then the next night, Kobe went off," Welts told CNN's Eliot Spitzer. "You know, I think it reinforced that probably it was time, because I think that will probably be remembered as a teaching moment."

While his disclosure has been received positively for the most part, Welts says is apprehensive about his future and feels that he is in uncharted territory.

"I don't know what my future is. I don't know where my career is going to go," he said. "I think that's part of the big problem with players. There's no example out there. No one has ever done it. No one really knows what's going to happen."

"Using gay to mean dumb or stupid... Not cool," Hill says in the commercial that is running during the playoff games.

"It is offensive to gay people," Dudley adds.

But some say more needs to be done.

"Male professional sports do have an issue with homophobia, but so does society in general," Chin, of Northeastern University, said. "The NBA and MLB are great vehicles for educating folks about this issue and could really turn these negative events into a positive teachable moment."