Brain of New York Rangers' Boogaard to be donated for research 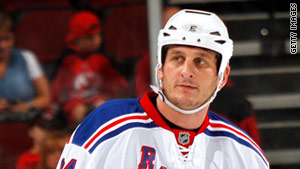 (CNN) -- The parents of a New York Rangers player found dead in his apartment have decided to donate his brain to Boston University researchers studying the effects of concussion in athletes, a medical examiner's office said Sunday.

An autopsy was conducted Saturday, according to the Hennepin County Medical Examiner's office in Minnesota, which confirmed that Boogaard's parents signed papers to donate Boogaard's brain.

The office has not released a cause of death, saying it was waiting for toxicology test results that might not be determined for several weeks.

Dr. Robert Stern, co-director for Boston University's Center for the Study of Traumatic Encephalopathy, confirmed Sunday that the family has donated Boogard's brain to the VA CSTE Brain Bank for study. The center has a donation registry for athletes to study effects of trauma on the brain and spinal cord.

Boogaard, 28, began his NHL career with the Minnesota Wild.

The Saskatoon, Saskatchewan, native joined the Rangers last July and appeared in 22 games during the 2010-11 season.

"He was a very thoughtful person, who will be dearly missed by all those who knew him. We extend our deepest sympathies to his family, friends and teammates during this difficult time."

Boogaard supported the Defending the Blue Line Foundation, a nonprofit that ensures the children of military personnel get the opportunity to play hockey.

While with the Rangers, he created "Boogaard's Booguardians," which hosted military families at home games, according to the website.