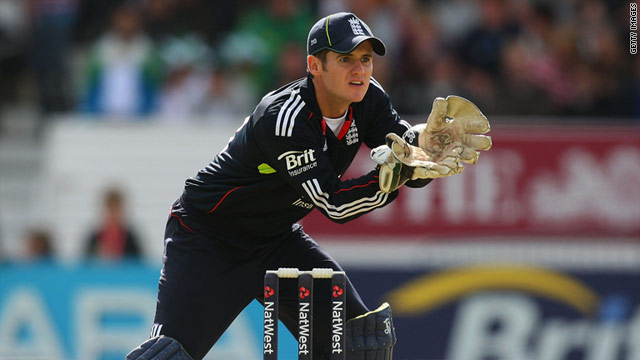 Steven Davies said he wants be known as "a good cricketer, not a gay cricketer" after going public about his sexuality.
STORY HIGHLIGHTS

(CNN) -- International cricketer Steven Davies has received the support of his England colleagues and team bosses after becoming the sport's first active professional player to announce that he is gay.

Davies, a wicketkeeper-batsman with the county Surrey who has played in 13 limited-overs internationals for England, made his revelations in a newspaper interview with The Daily Telegraph published on Monday.

"I feel now is the right time to be open about my sexuality. Those close to me have known for a while and have been nothing but supportive and understanding," he told the England Wales and Cricket Board website.

"I'd like to thank Surrey and the ECB, as well as the England players and coaching staff. They have all offered me their full backing from the moment I told them.

"My focus now is to play the best cricket I can for Surrey and get back into the England side. I am still the same person and I want to be remembered as a good cricketer, not a gay cricketer."

The 24-year-old was not selected for the World Cup being played in India, Sri Lanka and Bangladesh, but told coach Andy Flower about his sexuality before the tournament started this month.

"This is something Steve chose to discuss with myself and the squad some time ago. I would like to make it very clear that Steve is first and foremost a very talented cricketer and a valued member of the England set-up," Flower said on the ECB website, which also featured a statement from its managing director Hugh Morris.

Flower added: "His private life is his own concern and has absolutely no bearing on his ability to excel at the very highest level in international sport and I have no doubt that he will continue to work hard to regain a place in the England squad.

"Steve has had and will continue to have the full respect and support of the entire squad and everyone involved in England cricket."

It is rare for sportspeople to make revelations about their sexuality while still playing, and the closest precedent in cricket was Alan Hansford, a player with English county Sussex who admitted he was gay after retiring in 1992.

Davies told The Daily Telegraph that he had been inspired by the example of Welsh rugby star Gareth Thomas, who revealed his homosexuality two years ago.

"It just showed me it can be done. He was brave enough to stand up and say who he was," Davies said.

"It was a very courageous thing to do, so if I can help anyone else like he helped me, then that would be great."

"Many of those he plays with and against have known about this for some time, and none of them regard it as anything other than an entirely personal matter," Solanki said.

Meanwhile, the West Indies thrashed the Netherlands by 215 runs at the 2011 World Cup in New Delhi on Monday.

The two-time champions bounced back from last week's defeat by South Africa to get off the mark in Group B, posting a total of 330-8 in 50 overs as Chris Gayle top-scored with 80 and Kieron Pollard smashed 60 off only 27 balls faced.

Pollard scored the third quickest half-century in the tournament's history.

Teammate Kemar Roach then became only the sixth bowler to take a hat-trick at a World Cup when he polished off the Dutch line-up with three successive wickets to end with figures of 6-27 in an innings of just 115.

It was a disappointing day for the beaten team, who last week scored 292 before losing against England.