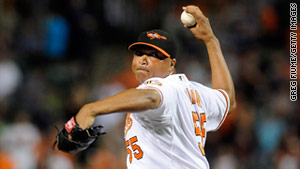 "In truth that young man was my friend, like a brother," he said of Michael Esteban Castillo. "It wasn't a thing like we began arguing and I started shooting. It was some accident; it happened by accident," Simon said, speaking at the police station where he turned himself in. "That's why I came here -- to open my soul," he said.

Simon's attorney said the major league baseball player had fired his gun into the air.

Puerto Plata District Attorney Victor Mieses said Monday that he will seek three months of incarceration against Simon and widen the investigation.

Puerto Plata Assistant District Attorney Juan Carlos Hernandez, who is handling the case, said of Simon, "So far he's the one. There's no doubt about the incident." Hernandez added that it's "normal" to seek temporary incarceration when there's a shooting death.

Police spokesman Maximo Baez said Simon turned in his gun as part of the investigation into the shooting in the Los Salados section of the town of Luperon, in the province of Puerto Plata, early Saturday.

Simon was accompanied by his attorney, Carlos Olivares, and by fellow Oriole Julio Lugo, Baez said.

"The projectile's trajectory was only up into the air, so much so that he left," Olivares said of his client. "He understood that nothing had happened at the moment. And 45 minutes later, when he was eating at a some restaurant or discotheque, somebody tells him, 'Hey, you're the one who killed so-and-so.'"

Lugo said, "We're concerned about his career or whether he's going to have to go to jail. We don't know if it was him. He wants to clear up what happened, but no one really knows if it was him for sure."

Simon was scheduled to appear at the courthouse in Puerto Plata for arraignment Monday, Baez said.

Journalists Jorge Pineda and Diulka Perez contributed to this report.