Favre hints he has played final game of NFL career 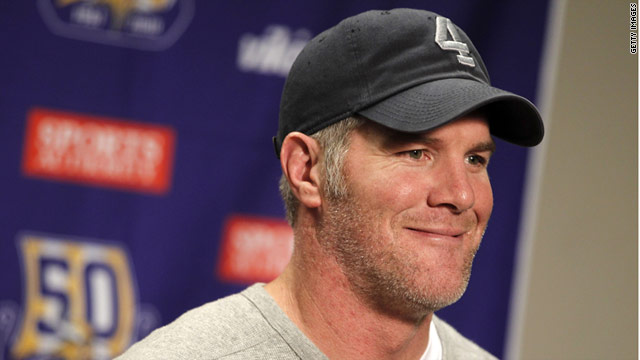 Brett Favre said he had no regrets as he appeared to bring down the curtain on his illustrious NFL career.
STORY HIGHLIGHTS

(CNN) -- NFL legend Brett Favre looks to have played the final game of his record-breaking career.

The injured star quarterback sat it out as his current team, the Minnesota Vikings, were beaten 20-13 by Detroit to end their poor season, then gave every indication that he was retiring for the third time.

"It's been a wonderful experience for me," Favre told the official NFL website.

"This year did not work out the way we would have hoped, but that's football. I don't regret coming back."

But the 41-year-old knows there will be doubters after he made the same announcements in 2008 and 2009 before negotiating lucrative multi-million dollar contracts to play further seasons in the NFL.

"I don't know for me if it's ever easy," Favre admitted.

"I'm sure throughout this year, the comment has been made that, 'We'll wait and see in August or September' and that's fine. It's time. I'm OK with it."

It's been a difficult season for Favre, who is the the NFL's all-time career record holder in wins, passing yards and touchdown passes.

He was fined $50,000 for failing to cooperate with an NFL investigation into improper text messages he allegedly sent to a former game-day hostess while he played for the New York Jets in 2008.

On the field, he finished with the lowest quarterback rating of his career (69.9) as the Vikings finished bottom of the NFC North, missing three of their last four games with injury.

Favre has been a three-time MVP during his 19 seasons in the NFL, 16 with the Green Bay Packers.

He helped the Packers to the Super Bowl in 1997.