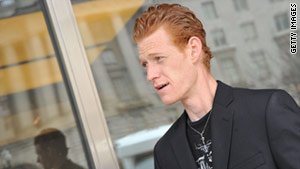 Redmond O'Neal will be back in court October 7 for a hearing to determine if he will stay in jail or return to rehab.
STORY HIGHLIGHTS
RELATED TOPICS

Los Angeles (CNN) -- Redmond O'Neal, the son of actor Ryan O'Neal and the late Farrah Fawcett, returned to jail Thursday after he was caught with illegal drugs at the rehab clinic where he was undergoing court-ordered treatment, a spokeswoman for the Los Angeles County District Attorney said.

"He had methamphetamine," Sandi Gibbons said.

O'Neal, 26, appeared before a judge Thursday who ordered him back to jail for the alleged probation violation, Gibbons said.

He will return to court on October 7 for a full hearing to decide whether he will stay in jail or return to rehab, she said.

He entered substance abuse rehab to avoid prison time when he pleaded no contest to felony gun and heroin possession three weeks ago. The judge agreed to let him serve his sentence with a one-year rehab program.

Redmond O'Neal, who has struggled with drug addiction since he was a teenager, was arrested last month during a traffic stop in Santa Monica, California.

He was convicted on two drug offenses two years ago, but was released a year ago from a Pasadena, California, sober living facility where he was undergoing court-ordered drug rehab.