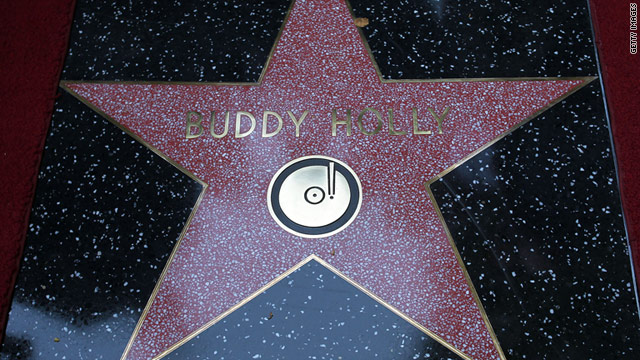 Before he died in a plane crash, Buddy Holly put his mark on rock and roll history.
STORY HIGHLIGHTS
RELATED TOPICS

Los Angeles (CNN) -- Buddy Holly finally got his star on Hollywood's Walk of Fame on Wednesday, which would have been the singer-songwriter's 75th birthday.

"It's never too late when you get a fantastic thing to happen," his widow, Maria Elena Holly, told CNN after unveiling the star on the sidewalk along Vine Street at the entrance to the historic Capitol Records building.

Holly was just 22 when he was killed in a plane crash, along with musicians Ritchie Valens and J.P. "The Big Bopper" Richardson.

"I'm saying now, my dear Buddy, you loved to go to the movies. You told me that one of your dreams was to write scores for movies and make your mark in Hollywood," his widow said during the ceremony. "Well, my dear, half of your dream unfortunately did not come true, but the other half did come true with a beautiful star on the Hollywood Walk of Fame."

Actor Gary Busey, who channeled Holly's voice and character in the 1978 movie "The Buddy Holly Story," attended the dedication.

"He's here right now," Busey said. "I feel his spirit in the air. It's beautiful."

What would Holly be doing now if he were still alive?

"Anything he wanted to," Busey said. "Scoring movies, helping people in different countries who are in trouble, like writing a song for them and taking it over there and singing it to them."

Busey is working with T Bone Burnett on an album of Holly songs, which he said he would also perform in a tour.

The Hollywood star ceremony was timed to coincide with this week's release of "Listen to Me: Buddy Holly," a tribute album of his songs performed by 16 artists, including Ringo Starr, Stevie Nick, Brian Wilson, Jackson Browne, Chris Isaak, Linda Ronstadt and Lyle Lovett.

Phil Everly of the Everly Brothers, a contemporary of Holly, also attended the dedication.