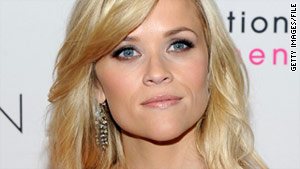 Actress Reese Witherspoon was hit by a car while jogging in Santa Monica, California.
STORY HIGHLIGHTS

(CNN) -- Reese Witherspoon was struck by a car Wednesday while out for a run in Santa Monica, California, but was not seriously injured, a spokesperson for the actress confirmed.

Police said Witherspoon was jogging around 11 a.m. near 20th Street and Georgina Avenue when she was struck, according to CNN Los Angeles affiliate KTLA.

Police said her injuries were minor, and her spokesperson, Nanci Ryder, said the actress was at home resting comfortably.

Police say the driver was an 84-year-old woman from Santa Monica, KTLA reported. She was cited for failing to yield to a pedestrian in a crosswalk and released.

Witherspoon, 35, won an Oscar in 2006 for her role as June Carter in "Walk The Line." She has two children with her ex-husband, actor Ryan Phillippe, and earlier this year married Jim Toth, a Hollywood agent.