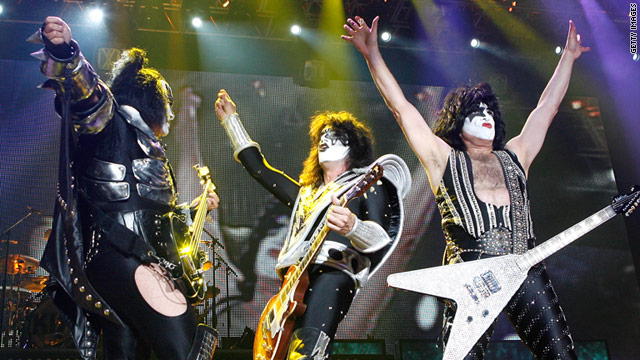 KISS signed up to pay tribute to Michael Jackson in an October concert.
STORY HIGHLIGHTS

Musicians who played in Jackson's touring band for the past two decades will also reunite as the house band for "Michael Forever: The Tribute Concert" in Cardiff, Wales, according to promoter Global Live Events.

Kevin Dorsey, who served as musical director for several Michael Jackson tours, will also direct the October 8 show, it was announced Monday.

Katherine Jackson, matriarch of the musical family, appeared on CNN Monday to discuss the show, which will also include performances by her children and grandchildren.

But fan reaction posted on the concert's Facebook page was negative to news that KISS would perform.

Many of the negative comments referred to a story published by the Canadian Press a week after Jackson's death on June 25, 2009, quoting KISS leader Gene Simmons concerning sexual molestation allegations against the pop star.

The promoter appeared unaware of the controversy Monday when CNN asked for a reaction.

It appeared unlikely the tribute stage would be the scene for a reunion for the surviving members of the Jackson 5. Two of the brothers, Jermaine and Randy, have publicly objected to the show being held at the same time Michael Jackson's doctor is on trial for his death.

Dr. Conrad Murray's involuntary manslaughter trial begins in September and is expected to continue through October.

"It will be on a Saturday when the courtroom is dark," Paul Ring, a Global Live Events executive said.

"This concert will unite various generations and musical genres, reminding everyone of just how amazing a talent Michael was," Ring said.

Fans can "register their interest for tickets" online at www.michaelforevertribute.com.

"The estate has not been contacted and is not involved with Global Live Events in the UK tribute concert announced today," spokesman Jim Bates told CNN at the time.