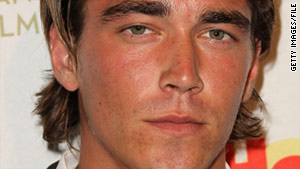 Clark James Gable's court date has been scheduled for August 26, according to authorities.
STORY HIGHLIGHTS

Los Angeles (CNN) -- Clark James Gable, 22, the only grandson of legendary actor Clark Gable, was playing with a laser when police arrested him, charging him with a felony this week, his manager told CNN Saturday.

Gable is accused of pointing the laser inside the cockpit of a Los Angeles police helicopter flying over Hollywood, authorities said. A friend of Gable, whom the manager said was driving the car Gable was in, is facing the same felony charge, police said.

"Boys will be boys, and he was playing with what he thought was a toy and not a felony piece," Roxane Davis, Gable's manager, told CNN. "From what he told me from jail, he had it out the window and he was shining it out the window, and the next thing he knew was that he had a spotlight on him.

She described the alleged crime "a huge mistake" and that Gable, an actor, "regrets anything about it."

Gable, of Canoga Park, California, admitted to authorities that he was pointing the laser recklessly, Davis said. Gable is charged with laser discharge.

"Obviously it wasn't intentional. Nobody knew it was a felony," Davis said. "They sell those things left and right, and he got it from his mother at a family reunion in Utah over the 4th of July weekend."

Gable was released from jail Friday in what Davis described as a publicity stunt by a bail bond firm that posted the bail and arranged for TV news cameras to film his release.

Gable didn't authorize the stunt and believes his sister, Kayley, 24, a reality show star, arranged the event, but Gable won't challenge how the firm bailed him out of jail, Davis said.

The pilot took evasive action, and the officer saw a vehicle as the source of the laser light, Medel said.

Davis said the car belonged to and was being driven by Maximillian Anderson, who is a friend of Gable's.

Anderson, 23, of Calabasas, California, was released from jail Friday after his family posted bond, Davis said.

Gable's court date has been scheduled for August 26, according to authorities.

Gable just completed filming the lead role in a thriller called "Looking for Clara" in Italy in June, Davis said.

On Thursday, he will return to an eight-week acting school program at the New York Film Academy in Los Angeles, Davis said. Before becoming an actor a year ago, Gable was working at a pet store in Agoura Hills, California, unloading dog food for $9 an hour and working 56 hours a week, Davis said.